Des Moines, IA -Ramon Laureano hit a tie-breaking homer in the seventh inning on Saturday night, but the Iowa Cubs answered with a two-run homer in the eighth and beat the Nashville Sounds 5-4 at Principal Park. The five-game series is even at two wins apiece, as the Sounds have dropped consecutive games.

Laureano’s two-out smash to left off Jen-Ho Tseng in the seventh was his fourth homer in 13 games in July, and it broke a 3-3 tie. But Jake Sanchez, who worked around trouble in the bottom of the seventh, gave up a two-out two-run shot to Taylor Davis in the eighth to account for the 5-4 final. 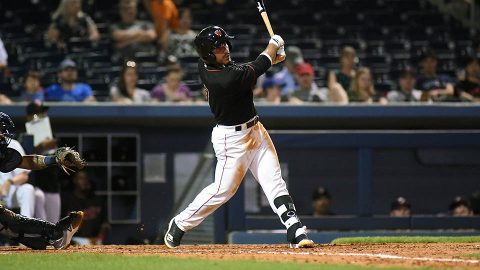 The Sounds first had gotten a lead in the fourth. Down 1-0 against Tseng, BJ Boyd and Jorge Mateo delivered consecutive run-scoring hits, and Boyd scored on a double play for a 3-1 advantage.

Iowa scored single runs in the fourth and sixth to make it 3-3 against Raul Alcantara, who turned in a quality start in the no-decision. Sanchez suffered the loss, and Cory Mazzoni retired all six batters he faced to notch the win for Iowa.

The five-game series concludes Sunday afternoon at 1:08 p.m. James Naile (5-8, 4.30) is scheduled to start for the Sounds, and Trevor Clifton (0-1, 4.23) will make the start for Iowa. The Sounds return to First Tennessee Park on Monday night to begin an eight-game, seven-day homestand at 7:05 against the Omaha Storm Chasers.