Nashville, TN – Melvin Mercedes provided the offensive heroics for the Nashville Sounds while Ben Bracewell was superb on the mound as they came from behind to defeat the Omaha Storm Chasers 5-4 in 11 innings.

Trailing 4-3 in the 11th inning, Sheldon Neuse squeaked a single past an outstretched Ryan O’Hearn at first base to knot the game at four runs apiece. After a sacrifice bunt from the birthday boy, BJ Boyd moved Neuse to second base, Mercedes came through in a major way. He found the hole on the left side of the infield to drive in Neuse from second and clinch the series-opening win. 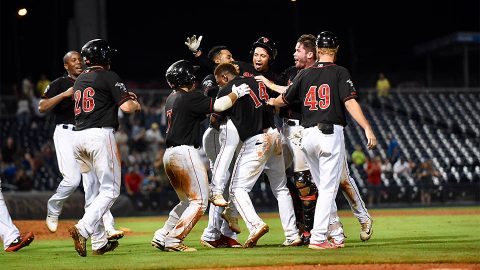 Bracewell shined on the mound for the Sounds as he retired the final 11 batters he faced and matched a career-high by tossing eight innings.

Omaha was the first team to light up the scoreboard as they broke through in the third inning. Bracewell walked Terrance Gore to lead off the frame. Bracewell then continued to be the thorn in his own side as he threw away a pickoff attempt, allowing the speedy Gore to advance all the way to third. Willing to trade in a run for an out, the middle of Nashville’s infield played regular depth as Billy Burns grounded out to shortstop Jorge Mateo, allowing Gore to score from third and put the Storm Chasers in front 1-0.

The Storm Chasers doubled their lead in the fourth inning and held the 2-0 advantage until the sixth inning when Nashville evened the score as Omaha’s Arnaldo Hernandez and Richard Lovelady became erratic. Hernandez yielded a single and issued two walks before being relieved of his duties. Lovelady entered and immediately induced a 1-2-3 double play to put the inning in-doubt. Lovelady then walked two batters and hit another to drive in two runs.

Bobby Wahl was outstanding in his lone inning of work as he struck out the side on just 10 pitches in the ninth inning. Carlos Ramirez earned his first win of the season as he was called upon for both of the extra frames. He allowed a pair of unearned runs.

Nashville and Omaha traded runs in the 10th inning before the Sounds plated two in the 11th.

Nashville’s errorless streak of 53 2/3 innings was snapped in the first inning as second baseman Melvin Mercedes committed an error to allow Omaha’s lead-off man, Billy Burns to reach base.

Nashville’s pair of runs in the sixth inning snapped a streak of 17 straight scoreless innings.

With his eight-inning performance, Bracewell became the fourth Sounds pitcher record a start of seven or more innings. After James Naile’s seven-inning outing Sunday afternoon, Monday night marked the second time this season the Sounds had starters last seven or more innings in back-to-back starts. Naile went seven on May 13 before Frankie Montas went eight on May 14.

The 11-inning game matched the longest game of the season for the Sounds. They also played 11 innings on April 12th against Iowa.

The walk-off victory was the sixth of the season for the Sounds. They are 6-2 in walk-off games this season.