Bryant, who is in her fourth season with Austin Peay athletics, was elevated to assistant athletics director in July 2016 with responsibility for the athletics budget and financial oversight of the department’s ongoing capital projects. During her nearly four year career with Governors athletics, she has helped facilitate and oversee significant budget increases within the department. 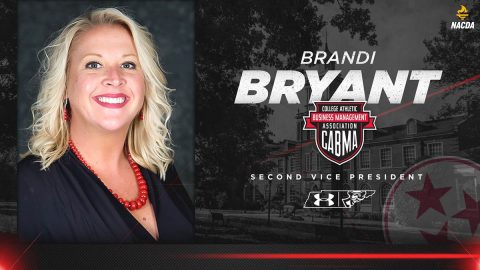 In addition, Bryant has led the charge for mentoring APSU’s student-athletes by developing the Growing Relationships and Opportunities for Women (GovsGROW) program. GovsGROW pairs female Austin Peay student-athletes with female business leaders in the Clarksville community that provide support as a mentor and role model.

CABMA is an organization devoted to the establishment, maintenance and implementation of the highest standards of integrity and efficiency in the scope, policies and procedures involved in the management and administration of business in the athletics departments and associations of colleges and universities. CABMA is administered by the National Association of Collegiate Directors of Athletics (NACDA), which is in its 53rd year.

“CABMA, like APSU athletics has experienced record setting growth,” said Bryant. “The momentum of an organization is driven by its people. The honor of having been elected to serve on a national board, filled with some of the most amazing fiscal leaders in country is a true honor for me.”