Nashville, TN – Close games have been the calling cards when the Nashville Sounds and Oklahoma City Dodgers get together and Friday night was no different as the Oklahoma City Dodgers edged the Nashville Sounds 5-4 in 10 innings. 9,868 fans watched the drama unfold at First Tennessee Park. The last eight games between the Sounds and Dodgers have been decided by one run.

After the Dodgers posted three runs in the eighth inning, the Sounds used a three-run rally of their own in the ninth inning to push the game to extras. 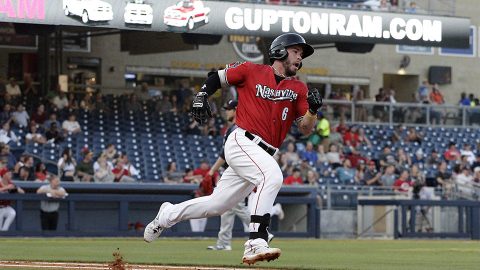 Oklahoma City starter Drew Hutchison fanned eight batters in his five shutout innings while Nashville’s Eric Jokisch turned in a solid outing. The Sounds’ southpaw turned in a season-high 7 2/3 innings and allowed three runs, two of which came in the eighth inning.

Oklahoma City broke the scoreless tie in the fourth inning thanks to a sacrifice fly from Donovan Solano. The score remained 1-0 until the seventh inning. Jorge Mateo tripled over the head of Alex Verdugo in center field to begin the frame. Two batters later Ramón Laureano popped out to first baseman Connor Joe, who reached into the stands to make the catch. Mateo scampered home to tie the game on the play.

The good feelings did not last long for the Sounds, however. Oklahoma City posted three runs in the top of the eighth thanks to three singles and a pair of doubles off Jokisch and Jake Sanchez.

Melvin Mercedes sparked a two-out rally in the ninth with a base hit. The next three batters all reached base including a game-tying two-run single from designated hitter Beau Taylor who had three hits on the night.

Oklahoma City plated a run in the top of the 10th to put the pressure back on the Sounds. Sheldon Neuse started the bottom of the inning with a single to right field and advanced to second on an error by Verdugo in right field. The designated runner, Bruce Maxwell moved to third base on the play. Center fielder Tim Locastro made a diving catch in shallow center field to rob BJ Boyd of a base hit and forced the runners to stay put. Joe Broussard struck out the next to batters to preserve the win for Oklahoma City.

The Sounds and Dodgers will play a doubleheader for games two and three of the series Saturday night at First Tennessee Park. Right-hander Raul Alcantara (4-1, 4.20) starts for the Sounds in game one against right-hander Brock Stewart (1-2, 3.18) for the Dodgers. Nashville has not announced its starter for game two while Oklahoma City will turn to right-hander Zach Neal (2-0, 2.53). First pitch for game one is scheduled for 5:05pm at First Tennessee Park.

Nashville is now 6-4 in extra-inning games this season.

Ramón Laureano swiped two bases tonight to become the third Sounds player to steal multiple bases in a game. Jorge Mateo and Slade Heathcott are the others.

With his seventh inning triple, Jorge Mateo became the ninth player in Sounds history to collect 10 triples in a season. Duane Walker holds the all-time single-season record with 15 in 1979.