The Nashville Sounds handed Oklahoma City’s Manny Bañuelos his worst outing of the year as they tagged the All-Star for a season-high seven runs, all earned. The runs came in bunches as the Sounds scored multiple runs in three different innings against Bañuelos. Nashville’s James Naile logged his ninth quality start of the season as he went 6 1/3 innings and gave up five runs but just three were earned. 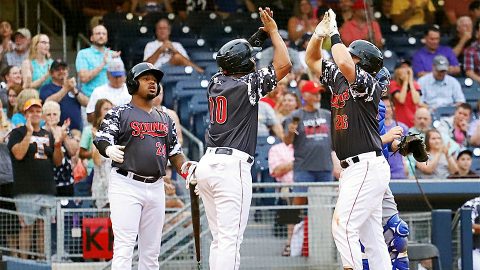 Nashville used a three-run second inning to take a 3-0 lead. Jorge Mateo lined a run-scoring double to open the scoring. Two batters later J.P. Sportman came through in a big way for his first hit at the Triple-A level. Sportman looped a double into shallow left field to drive in a pair of runs.

The Sounds made more noise in the third inning. With two outs Anthony Garcia worked a walk to prolong the inning. Neuse stepped up to the plate and launched a two-run blast beyond the left field fence. The home run was Neuse’s fourth of the season and extended his hitting streak to eight games.

Oklahoma City began to chip away at the 5-0 deficit in the fourth inning. Catcher Kyle Farmer belted a solo home run in the fourth and then the Dodgers posted two unearned runs in the fifth. The Sounds responded with two runs of their own in the fifth inning. Neuse ripped a two-run double down the left field line to restore the four-run lead for the Sounds.

Without the services of Bobby Wahl the Sounds turned to Josh Lucas to get the final three outs. Lucas walked the leadoff batter but retired the next three in succession for his fourth save of the season.

The Sounds are off on Monday before beginning a three-game series in Las Vegas against the 51’s Tuesday night at Cashman Field. Right-hander Chris Bassitt (2-4, 5.36) starts for the Sounds against right-hander Cody Martin (2-3, 7.21) for the Dodgers. First pitch is scheduled for 9:05pm.

Tonight’s crowd of 10,697 fans was the 14th sellout of the season and 69th all-time at First Tennessee Park.

Third baseman Sheldon Neuse had two hits for the Sounds and is now on an eight-game hitting streak. His longest of the season is nine games. His four-RBI were a season-high.