NASA believes collision caused Uranus to rotate on it’s side

Mountain View, CA – Scientists have always wondered how Uranus got tilted so much that it spins on its side, and now research on the planet’s early formation gives us new insight. Four billion years ago, scientists believe a young proto-planet of rock and ice collided with Uranus, causing its extreme tilt. Instead of rotating like a top spinning nearly upright, as Earth does, the planet “rolls” on its side as it circles the sun.

The research team, led by Durham University, UK, in collaboration with scientists at NASA’s Ames Research Center in Silicon Valley, used advanced computing techniques to create the most detailed simulation to date of the suspected impact. 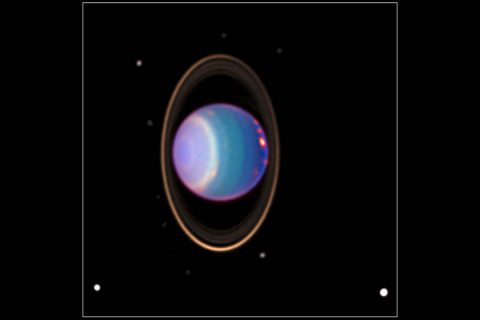 Uranus tilts so much that it spins on its side. (NASA)

Through more than 50 simulations of impact scenarios using a supercomputer, this research group determined that an object at least twice the mass of Earth likely impacted the young planet with a grazing blow.

The collision was so strong it reshaped the entire planet and pushed it onto its side. But, the collision was likely not strong enough to blast the planet’s atmosphere off into space or significantly change its orbit around the Sun.

This research was the first of its type to take the planet’s atmosphere into account in its simulations of the impact. This helped the scientists better define what that event might have looked like.

The impact might have left molten ice and lopsided lumps of rock within the planet, perhaps explaining its tilted and off-center magnetic field, too. Rock and ice thrown into orbit would have then clumped together to form the rings and moons around Uranus, now in its newly established rotation.

But this discovery goes beyond explaining how Uranus became what it is today. It helps us on our search to understand other planets outside our solar system – exoplanets. Uranus is a medium-size, gaseous planet with a rocky and icy core. Based on findings from the Kepler space telescope, the more common type of exoplanet is very similar to Uranus. Learning about this impact helps us understand how similar collisions lead to the formation of other planets, and what this means for their ability to support life.

The findings, published in The Astrophysical Journal [1], paint a riveting picture of Uranus’ early tumultuous years, and gives us the tools to understand planets like it throughout the cosmos.