Clarksville, TN – Legends Bank presents Rodgers and Hammerstein’s masterpiece “Oklahoma!” at the Roxy Regional Theatre, beginning this Friday, July 27th, 2018 at 8:00pm. In keeping with the theatre’s traditional pay-what-you-can opening night, all tickets not pre-sold at the regular ticket price will go on sale at 7:30pm that evening for a $5.00 minimum donation.

The high-spirited rivalry between cowboys and farmers in Western Indian territory, just after the turn of the century, provides the colorful background for love between handsome cowboy Curly (played by Hunter Brown) and winsome farm girl Laurey (Amy Laviolette). 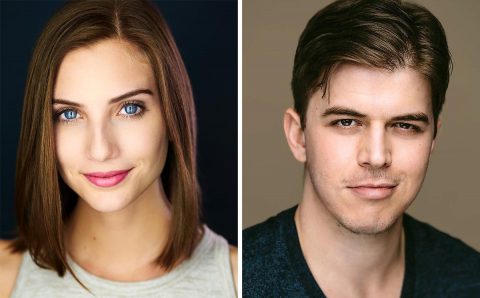 Although the road to true love never runs smoothly, with these two headstrong romantics holding the reins, love’s journey is as bumpy as a surrey ride down a country road.

Blending song, ballet and “hoe-down” stepping, composer Richard Rodgers and lyricist Oscar Hammerstein II’s initial collaboration features among its musical highlights “Oh, What a Beautiful Mornin’,” “People Will Say We’re in Love,” “The Surrey with the Fringe on Top,” “Many a New Day,” “Kansas City” and the triumphant song of the brand new state, “”Oklahoma!”” 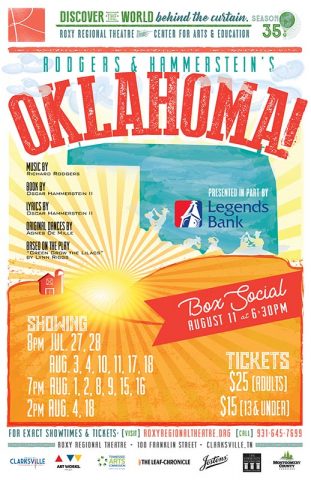 Patrons are invited to a “Box Social” before the evening performance on Saturday, August 11th. The event features a pre-show cookout and box social under the marquee at 6:30pm, including hamburgers, hot dogs and sides, followed by a box social with desserts prepared by Laurey, Aunt Eller, Ado Annie and the whole cast and auctioned off by Judge Andrew Carnes.

Attendees are also encouraged to bring their own homemade desserts to auction off, with proceeds benefiting the Roxy Regional Theatre. Tickets for the package, which includes the 8:00pm performance of “Oklahoma!”, are $40.00 (adults) and $25.00 (ages 13 and under). The reservation deadline for the box social is Friday, August 3rd.

“Oklahoma!” is presented through special arrangement with R&H Theatricals, with musical recordings provided by The MT Pit, LLC.

Tickets are $25.00 (adults) and $15.00 (ages 13 and under) and may be reserved online at www.roxyregionaltheatre.org [2], by phone at 931.645.7699, or at the theatre during regular box office hours (9:00am to 2:00pm, Monday through Friday, and one hour prior to curtain). APSU students, military and CitySaver coupon holders can receive two tickets for the price of one to Wednesday and Thursday performances during the run.