Las Vegas, NV – The Nashville Sounds were done in by a five-run first inning and failed to capitalize on chances late as they fell to the Las Vegas 51s 8-5 Thursday night at Cashman Field. The 51s took the three-game series two games to one.

The Sounds found themselves in a deep hole after just one inning as the 51s sent all nine batters to the plate and scored five runs in the opening frame. Peter Alonso drove in a pair with a base hit, Dominic Smith doubled the Las Vegas lead with a two-run blast, and Patrick Kivlehan scored on an error by third baseman Sheldon Neuse. 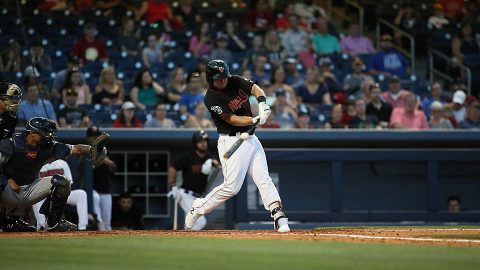 Sounds starter Eric Jokisch settled down after the first inning and tossed four shutout innings before yielding three runs in the sixth. Kivlehan started the inning with his second triple of the game and scored on an RBI single.

Two more runs scored, one on a wild pitch from Jokisch and one on a passed ball by Bruce Maxwell.

Nashville chipped away at the lead with a three-run fourth inning. With two outs BJ Boyd got the rally started with a double down the left field line. Back-to-back pop up singles from Neuse and Maxwell scored a pair of runs. A Steve Lombardozzi single moved Maxwell along to third base and the Sounds catcher came home to score on a wild pitch from Las Vegas’ Drew Gagnon.

The Sounds threatened to rally in each of the final three innings but managed to score just once in the seventh and once in the eighth. The first four batters to come to the plate in the seventh all reached base highlighted by an RBI double from Ramón Laureano but that was all the Sounds could muster.

The Sounds loaded the bases in the eighth inning but a Lombardozzi sacrifice fly produced the only run of the frame. In the ninth inning Nashville put a runner at each base with no outs but Neuse struck out and Maxwell bounced into a game-ending double play.

The Sounds head to Salt Lake for a four-game series. Game one of the series is scheduled for Friday night at Smith’s Ballpark. Right-hander Raul Alcantara (4-2, 4.72) starts for the Sounds against right-hander Griffin Canning (0-2, 7.18) for the Bees. First pitch is scheduled for 7:35pm.

Jorge Mateo singled in the second inning to extend his hitting streak to six games, which matches a season-long streak. It is his fourth six-game hitting streak of the season.