Unemployment Rates Increase in all Tennessee Counties during June 2018

Nashville, TN – The unemployment rate for each of Tennessee’s 95 counties increased in June 2018, according to data released today by Tennessee Department of Labor and Workforce Development (TDLWD) Commissioner Burns Phillips.

Montgomery County’s unemployment rate for June was 4.6 percent which is up 1.3 percent from May’s 3.3 percent. 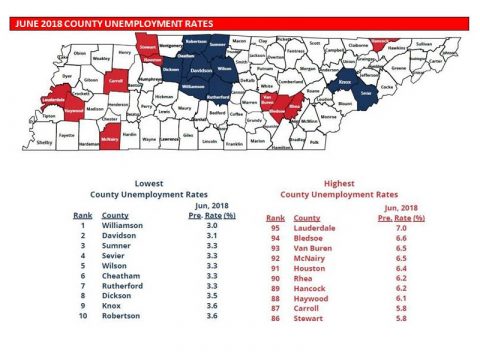 “These increases in county unemployment rates are something we typically see in June,” said Phillips. “In fact, we’ve experienced this uptick every June since the state started keeping records in 1976.”

The county rates incorporate seasonal workers who are temporarily unemployed. Between May and June of this year, education service jobs were down by 38,000. These are custodians, bus drivers, and other school support staff who are not working during the summer months.

June is also typically the month when recent high school and college graduates enter the workforce and have yet to find employment, adding to the jobless count across the state.

Davidson County experienced the state’s second lowest unemployment figure with a rate of 3.1 percent, up from of 2.2 percent the previous month.

“These increases, while something we’d rather not experience, are right on par with last June,” Burns explained.  “When you look at the year-to-year comparisons for many counties, the rates are the same as they were this time last year.”

Tennesseans who are searching for employment will find a variety of valuable resources on the state’s workforce website.

A complete analysis of Tennessee’s county unemployment data for June 2018 is available here.