Salt Lake City, UT -The Nashville Sounds scored three runs in the ninth and four runs in the 11th to cap a dramatic come-from-behind 11-8 win over the Salt Lake Bees Monday night at Smith’s Ballpark.

The four-hour, 28-minute marathon featured 13 pitchers, 31 hits, 15 walks and saw the two teams combine to go 17-for-50 with runners in scoring position.

Nashville trailed 5-0 early as Salt Lake chased starter Daniel Mengden in the bottom of the first inning after four runs and 41 pitches. Six Nashville relievers combined to limit the Bees to four runs over the next 10-plus innings to keep the Sounds alive. 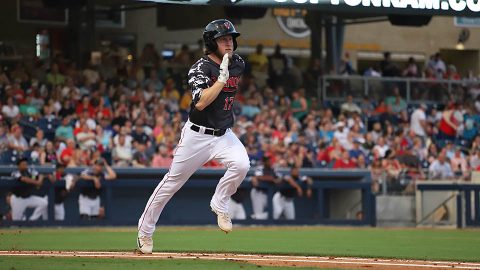 The comeback began in the third when Beau Taylor knocked in Melvin Mercedes with a run-scoring single. In the fifth, hits from Ramon Laureano, Taylor and Steve Lombardozzi helped Nashville put up three runs to trim the deficit to 5-4.

Salt Lake scored single runs in the home half of the fifth and seventh to build a 7-4 lead.

The late-inning heroics came with two outs in the ninth for the Sounds. Sheldon Neuse’s two-out single kept the game alive and extended his hitting streak to 15 games.

Lombardozzi drew a walk and Jorge Mateo’s infield single loaded the bases for Brett Vertigan. The right-fielder rifled a line drive down the right field line, clearing the bases with a double to draw the game even at 7-7.

With the game still tied at 7-7 in the top of the 11th, catcher Beau Taylor gave the Sounds their first lead of the night with a run-scoring triple. The inning continued with two walks and two more hits. Lombardozzi knocked in his third run of the game with a sacrifice fly, Vertigan drove in his fourth run of the night with a single and Mercedes made it an 11-7 game with a run-scoring base hit.

Jeremy Bleich worked the bottom of the 11th and gave up a sacrifice fly but shut down any comeback hopes for Salt Lake. Liam Hendriks worked two scoreless innings and earned his second win of the season.

Laureano, Taylor, Vertigan and Mercedes had multi-hit games as the Sounds pounded out 15 hits in the win.

The Sounds return home to First Tennessee Park following a league off day Tuesday. Left-hander Eric Jokisch (3-9, 4.69) starts for the Sounds against right-hander Cy Sneed (9-5, 3.51) for the Fresno Grizzlies. First pitch is scheduled for 7:05pm.

Tonight’s win improved the Sounds’ record to 7-5 in extra innings.

The Sounds overcame a five-run deficit, their largest comeback win of the season.

The 4-hour, 28-minute game was the longest Sounds game of the year.

Sheldon Neuse extended his career-long hitting streak to 15 games with a two-out single in the ninth inning. Neuse is batting .379 (22-for-58) during his 15-game streak.

Ramón Laureano extended his hitting streak to 10 games with a single in the third inning. Laureano went 3-for-6 and is batting .512 (21-for-41) during his 10-game streak.

The 2018 season is the Sounds’ 41st in franchise history and fourth as the Oakland Athletics’ top affiliate. Single-game tickets are available now by calling 615.690.4487 or by visiting www.nashvillesounds.com [2]