The ceremony, set for 5:00pm on August 8th, 2018 in the APSU Morgan University Center, honors the University’s graduating students who are either veterans, active-duty military personnel, reservists or members of the National Guard. 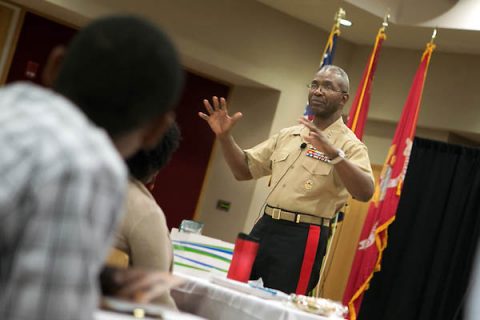 During the ceremony, each participant will receive a red, white and blue graduation cord and one of the University’s special military coins.

Bailey, an Austin Peay State University alumnus, spent 40 years in the U.S. Marine Corps, with his final assignment being the deputy commandant for Plans, Policies and Operations for the Marine Corps.

While a student at Austin Peay, Bailey played football for the Governors and participated in the school’s ROTC program. In 1977, shortly after he graduated with his Bachelor of Science degree in biology, Bailey was commissioned a second lieutenant in the U.S. Marine Corps.

Earlier this summer, he was hired to oversee the University’s offices of advancement, communication and strategic initiatives. His return to campus coincides with Austin Peay’s increased focus over the last few years on supporting military students.

Austin Peay is the state’s largest provider of higher education to military-affiliated students, with at least 2,329 enrolled students having a military connection in the fall of 2017. In 2015, the Tennessee Higher Education Commission (THEC) honored the University’s support of this population by naming Austin Peay a Veterans Education Transition Support (VETS) Campus.

According to THEC, VETS Campus certification is awarded to higher education institutions that “not only prioritize outreach to veterans, but successfully deliver the services necessary to create a supportive environment where student veterans can prosper while pursuing their education.”

Austin Peay offers a full-time Veterans Affairs counselor on campus through the VetSuccess program, as well as a Student Veterans Organization and a Military Student Center. Earlier this year, the University opened a new, federally funded Veterans Upward Bound Office on campus to assist low-income veterans and veterans who are first-generation college students earn a college education.

For more information on the ceremony or APSU’s military coin, contact Carol Clark, executive assistant to the President for Community and Government Relations, at [1]