Tampa, FL – Volatility is the trend for July gas prices as the rate for crude oil rises and drops amid lingering geopolitical concerns. In the U.S., the first half of the month saw pump prices increase from $2.85 to $2.89, while the second half is proving cheaper with the national gas price average down to $2.84 today.

The national average has not been this low since early May. 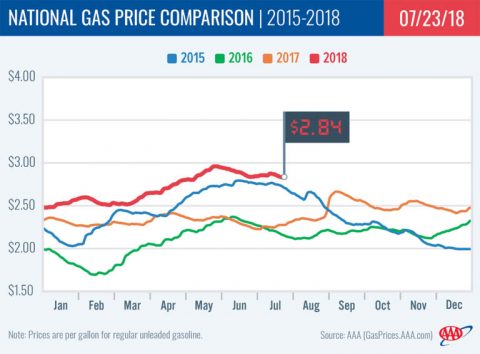 “July gas prices have been on a roller coaster ride, but appear to be on a downward slope at the moment. If demand and supply stay consistent, prices have the potential to stabilize barring any major events – geopolitical or natural disasters,” said Jeanette Casselano, AAA spokesperson.

“The market is also following this up and down trend lately. Last week, crude prices dropped below $70.00/bbl for the first time since June, but then returned above the price point to close out the week,” stated Casselano. 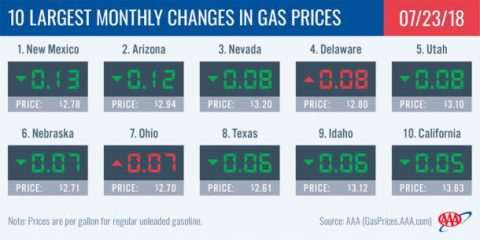 Still, gas price averages in the majority of states in the region have declined on the week, with Arizona (-3 cents) leading the way. Only Hawaii (+1 cent) saw an increase.

According to the Energy Information Administration’s (EIA) petroleum status report for the week ending on July 13, inventories of gasoline in the region dropped by 500,000 bbl. They now sit at 30.3 million bbl, which is nearly 3.5 million bbl higher than total levels at this time last year.

The surplus will likely help guard against price spikes in the event that supply tightens in the region this week.

Across the South and Southeast states, gas prices range from as expensive as $2.77 in Florida to as cheap as $2.55 in Alabama. On the week, prices in the region are as much as four cents cheaper.

On the month, gasoline inventories in the region have drawn by 3.4 million bbl yet are 1.2 million bbl ahead of levels this time last year. Much of the decline in inventory levels can be attributed to high U.S. export levels.

Gas prices are as much as five cents cheaper on the week across the Mid-Atlantic and Northeast states. Looking at prices compared to a month ago, most states in the region are seeing cheaper pump prices – as much as four cents less. On the other hand, six states are paying more, with Delaware seeing the largest month-over-month increase in the country: Delaware (+8 cents), West Virginia (+3 cents), Washington, D.C. (+3 cents), Pennsylvania (+1 cent), Maryland (+1 cent) and New Jersey (+1 cent).

Gasoline inventory sits at a healthy 66.3 million bbl with the EIA reporting a small 148,000 bbl draw in their latest report. Despite the region seeing a 2 million bbl surplus year-over-year, gas prices are more than 50-cents more than last summer, but the strong inventory levels may help to stabilize or drop gas prices in the coming week.

On average, gas prices are 62-cents more expensive than a year ago for motorists filling up in states in the Rockies region. Wyoming (+69 cents) has the largest year-over-year difference in pump prices.

Inventories in the region built by a small 50,000 bbl on the week, according to EIA data. The build was not enough to move gas prices up. At 7.1 million bbl in total inventory, levels are 425,000 bbl ahead of last year.

More so, during July 2017, the inventory levels in the region did not exceed 6.7 million bbl.

At the close of Friday’s formal trading session on the NYMEX, WTI increased $1.00 to settle at $70.46. Oil prices trended higher at the end of last week following news from EIA on record-breaking crude production in the U.S. At 11 million b/d, total crude production in the U.S. hit its highest rate ever recorded since the EIA began reporting its data.

Moving into this week, analyst are continuing to keep an eye on the global supply restraints due to U.S.-imposed sanctions on Iran’s oil exports and ongoing d economic troubles in Venezuela, which could send crude production prices higher.

The U.S. dropped five oil rigs last week leaving today’s total at 858. In spite of this, with nearly 94 more active oil rigs over last year’s count, according to Baker Hughes, Inc., increased oil production shows few signs of slowing down through the second half of 2018. Growth in domestic oil production helped total crude inventories around the country increase by 5.8 million bbl last week, bringing the total to 411.1 million bbl.