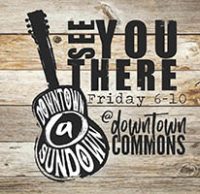 Clarksville, TN – This Friday, August 17th, 2018 Music 4 Mercy, a local soul and jazz group, and The Beagles, a local group that plays cover music spanning the decades from the 70s through now, will open for Broadcast 90’s, The Ultimate 90’s Rock Tribute band, playing homage to the last golden decade of guitar driven rock: the 1990’s, during the fourth concert in the six-part Downtown @ Sundown series.

“This will be a fantastic night of music in Downtown Clarksville at Downtown Commons. This Friday’s show is a triple threat featuring three top notch acts to include two local favorites, Music 4 Mercy and the Beagles,” stated Norman Quirion, Two Rivers Company Executive Director.

Music 4 Mercy starts at 6:00pm, The Beagles at 7:00pm and the featured artist, Broadcast 90’s takes the stage at 8:00pm. Everyone is invited to come early, and bring family, friends and their own chairs and blankets. Please leave coolers and pets at home.

The Downtown @ Sundown Concert series began in May and are held the third Friday of each month through October from 6:00pm-10:00pm at Downtown Commons located at 215 Legion Street. To read about future concerts and other events at the Downtown Commons, visit www.Downtowncommons.org/sundown