Nashville, TN – Beau Taylor’s clutch base hit in the bottom of the eighth inning lifted the Nashville Sounds to a 5-4 win over the New Orleans Baby Cakes in front of 9,387 fans at First Tennessee Park Sunday night.

Taylor’s line drive single to left-center scored Anthony Garcia from third to snap a 4-4 deadlock. Garcia doubled with one out and moved to third on a wild pitch just moments before Taylor’s go-ahead single off New Orleans reliever Nick Wittgren.

Nashville closer Liam Hendriks had to wiggle out of a jam in the ninth to lock in the win. Chad Wallach started the inning with a single to right-center. 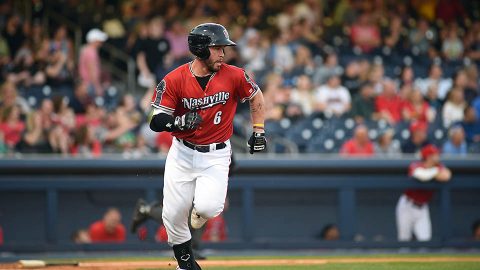 After a sacrifice bunt, Jon Rodriguez’s single to left put runners at the corners for the Baby Cakes.

Hendriks came back with back-to-back strikeouts of Braxton Lee and Isan Diaz to notch his fifth save of the season.

A host of Nashville relievers kept the Sounds in the game after starter Frankie Montas allowed four runs in five innings. J.B. Wendelken, Chris Hatcher, Dean Kiekhefer and Raul Alcantara combined for three scoreless innings before handing it off to Hendriks in the ninth.

Franklin Barreto and Sheldon Neuse started the scoring with a pair of solo homers in the second inning. Barreto’s 15th blast of the season gave the Sounds a 1-0 lead and Neuse’s fifth of the year made it 2-0.

New Orleans took a 3-2 lead in the third, but Nashville responded with two of their own in the fourth. RBI singles by Neuse and Jorge Mateo gave the Sounds a 4-3 lead.

A single tally by the Baby Cakes in the fifth evened the game at 4-4. It remained tied until the eighth when Taylor delivered the go-ahead run-scoring single.

The Sounds begin a 10-game road trip on Tuesday night in Round Rock, Texas. Right-hander Daniel Mengden (4-1, 3.27) starts for Nashville against right-hander Chris Rowley (1-3, 4.18) for Round Rock. First pitch is scheduled for 7:05pm.

The 2018 season is the Sounds’ 41st in franchise history and fourth as the Oakland Athletics’ top affiliate. Single-game tickets are available now by calling 615.690.4487 or by visiting www.nashvillesounds.com [2]