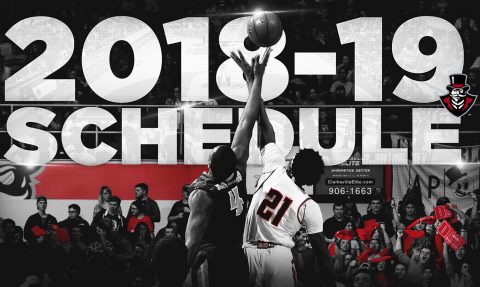 That precedes the 18-game gauntlet that is the 2019 OVC schedule, which will likely see the Govs pegged as one of the favorites this season after an 11th-place prediction last year.

“It’s a schedule that will challenge us to learn to play on the road,” Figger said. “That was something our guys didn’t handle well early on last year, and I felt like this year in order to compete for a league championship, we need to go out and learn to win on the road. Unfortunately, we don’t have as many games as I’d like in the nonconference, but we play neutral-site games and road games so we’ll be tested from that standpoint; to be able to win the league, you’ve got to win road games.”

With no exhibition games on the slate, the Govs will jump right into it by hosting Oakland City in the regular season opener, November 6th—the third consecutive season the Mighty Oaks have been the Govs home-opening opponent and second time in six seasons they’ve been the first regular-season opponent for Austin Peay.

Then begins the odyssey. November 9th, the Govs journey to Starkville to face Mississippi State, a 25-win team under Ben Howland a year ago that returns Quinndary (second-team All-SEC) and Nick Weatherspoon (All-Freshman) from their run to the NIT semifinals.

Nov. 12 marks the beginning of the Jersey Mike’s Jamaica Classic, with the Govs taking on American Athletic foe USF in Tampa, Florida. They’ll move on to Montego Bay, Jamaica for the November 16th-18th contests, facing Central Connecticut to open their stay in the tournament and Campbell—the first of two contests against the Fighting Camels this season—in the second game. The Jamaica Classic closes out in Athens, Ohio, November 24th, with a Thanksgiving weekend contest at Ohio.

The Govs wrap up November and begin December with an Alabama road trip, taking on Troy (November 29th) and Alabama A&M (December 1st) in return trips for a pair of games during the 2017-18 season. Austin Peay is a combined 5-0 all-time against the Trojans and Bulldogs.

Now in the eighth season under head coach Mike Anderson, the Razorbacks lost linchpin players in Jaylen Barford and Daryl Macon, but return SEC All-Freshman honoree Daniel Gafford, who should provide a worthy opponent to OVC Freshman of the Year Terry Taylor [3]—he averaged 11.8 points and 6.2 rebounds, shooting 60.5 percent from the floor.

The beginning of 2019 also marks the beginning of the league schedule—for the first time since 2015-16, all OVC contests will be played after the start of the New Year. The Govs open up with a pair of home games against Eastern Kentucky (January 3rd) and Morehead State (January 5th) before embarking on a four-game road trip to face Southeast Missouri (January 10th), UT Martin (January 12th), SIU Edwardsville (January 17th) and Eastern Illinois (January 19th).

The Govs welcome a pair of visitors from Nashville to open January’s final week, with Tennessee State (January 24th) and Belmont (January 26th) set to make the trek up Interstate 24. Austin Peay then takes to the road again to visit Tennessee Tech (January 31st) and Jacksonville State (February 2nd).

After spending so much time on the road in the season’s early going, February will see the Govs at home for five of their eight contests.

After returning from Jacksonville State, five of Austin Peay’s next six games will be in the Dunn Center—SIUE (February 7th), Eastern Illinois (February 9th), a Valentine’s Day Special against Murray State (February 14th), Southeast Missouri (February 21st) and UT Martin (February 23rd). The Govs February 16th trip to Morehead State will be their first journey to Johnson Arena since 2016.

Austin Peay closes out the regular season with trips to Eastern Kentucky, February 28th, and Murray State, March 2nd, the latter to close out the basketball portion of the Heritage Bank Battle of the Border. The 2019 OVC Men’s Basketball Championship will once again be at the Ford Center in Evansville, Indiana, March 6th-9th.

Below is a brief summation of the non-conference schedule. Be sure to keep up with everything happening around Austin Peay at LetsGoPeay.com and the official Facebook page of Austin Peay athletics, as well on Twitter and Instagram (@letsgopeay).