Austin Peay (1-0) shook off cold starts in each of the first two sets. 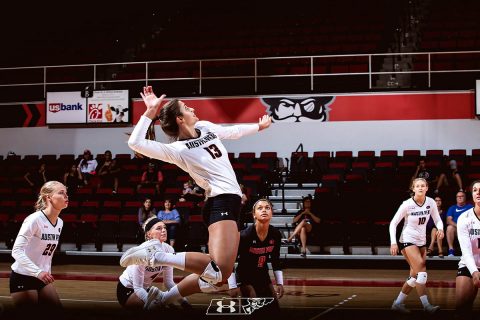 The Govs overcame an 11-7 deficit in the first set and an 8-3 hole in the second, winning both frames late.

The third set saw a better start by the Govs as they traded points with the Broncos before using a 9-2 run to take control of the final set en route to the sweep.

Gable opened the season with an impressive nine-kill outing in the opening set and carried the Govs with 17 of the team’s 47 kills. Freshman Jaymeson Kinley [2] made her first collegiate start at libero, finishing with a team-best 16 digs while chipping in a pair of kills.

Western Michigan (0-1) could not take advantage of its good start in the opening set and was held in check by the Governors defense in the second and third frames. The Broncos finished with 34 kills – 15 in the first set – and was limited to a .174 team attack percentage. Rachel Bontrager led WMU with 12 kills.

Set 1, Govs Win: 26-24
APSU traded points with WMU in the early going before back-to-back Bronco blocks created a two-point cushion that became four points, 11-7, after consecutive Govs errors. Austin Peay would not allow the deficit to grow larger and finally tied the Broncos at 22-22 with a Gable kill.

The Govs got to set point first, but were denied in their first opportunity. Gable would notch her ninth kill of the set to provide a second set-point chance, which Moore would capitalize on with a kill for the win.

Set 2, Govs Win: 25-17
WMU again took early control, racing out to a 5-1 lead as the APSU offense could not get on track. Austin Peay slowly reeled the match back to level, tying the match on a Moore kill at 10-10.

Sophomore Nina Korfhage [5] helped the Govs rein in control of the match with eight consecutive points in her turn on serve, including two aces, as the Govs took a 22-13 lead they would not relinquish.

Set 3, Govs Win: 25-20
Neither the Govs or Broncos enjoyed more than a two-point lead through 12-12. Kinley would help the Govs gain control of the set with a six-point rally during her turn at service for a 17-12 lead. Western Michigan would threaten late, piecing together a 7-4 run to close within two points, but the Govs won three of the final four points to secure the victory.

Gable Ties Career High
Gable’s 17-kill outing saw her reach back to tie a career best set during her sophomore campaign with the Governors. She last recorded 17 kills in 2016 against Elon, while also breaking her career high for attack attempts (39).  Gable also had 10 digs to record a double-double in the season opener.

Taff Closes in on 200
Needing just seven blocks to reach the 200-block milestone, senior middle blocker Kaylee Taff [6] nearly got all the way there in her first match of the season, posting four blocks.

She now sits just three blocks shy of the mark, which would make her the 12th to reach 200 blocks at Austin Peay.

Winning Start
Austin Peay opened a season with a victory for the second consecutive year and for the third time in current head coach Taylor Mott [7]‘s career.

“I was pleased that we kept our composure after we got down in each of the sets,” said head coach Taylor Mott [7]. “Cecily (Gable) was effective for us in the front row and Kristen (Stucker) did a great job of recognizing she was playing well and got her the ball consistently.”