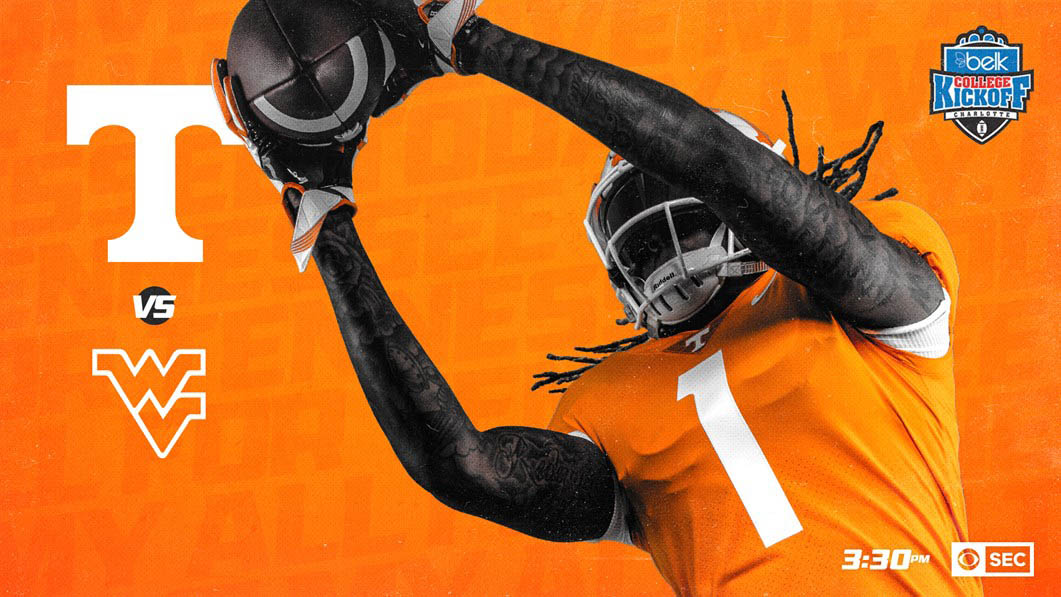 Knoxville, TN – Tennessee Vols Football will open its 2018 campaign on Saturday, September 1st, 2018 against No. 17/20 West Virginia in the Belk College Kickoff Game at Bank of America Stadium in Charlotte, NC.

Kickoff for Saturday’s season opener is slated for 2:30pm CT on CBS with Brad Nessler (play-by-play) and Gary Danielson (analyst) calling the action in the booth and Jamie Erdahl reporting from the sidelines. Vol Network radio affiliates will have a live audio broadcast with Bob Kesling, Tim Priest and Brent Hubbs. Sirius and XM satellite radio will also carry the game on Channel 201. 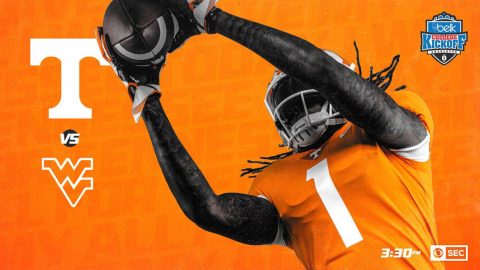 Tennessee’s Jeremy Pruitt will make his head coaching debut for the Volunteers after being named the program’s 26th head coach on December 7th, 2017.

This year’s season opener will mark the first time the Vols have opened the season on a Saturday since 2015 when they defeated Bowling Green, 59-30, on September 5 at Nissan Stadium in Nashville, TN.

Located in the heart of college football country, and home to the newly renovated Bank of America Stadium, the city of Charlotte will play host to the third Belk College Kickoff Game this season. UT will look to improve the SEC’s record to 3-0 in the Belk College Kickoff Game as fellow SEC East member South Carolina has come away victorious in the first two contests in 2015 and 2017.

This year’s battle between the Vols and Mountaineers will be the first-ever meeting between the two storied programs. Tennessee is 9-8 all-time against current members of the Big 12.

Tickets for the game can be purchased Here.

The Jeremy Pruitt era of Tennessee Vols football officially begins this Saturday as the Vols travel to the Queen City to take on Dana Holgorsen’s West Virginia Mountaineers.

Pruitt was a standout high school coach before joining the Alabama staff as the Director of Player Development. He owns a 96-13 record (.881 winning percentage) as a collegiate assistant coach and is a two-time Broyles Award finalist in addition to being named National Recruiter of the Year by 247Sports in 2012. He has coached 44 NFL draft picks and 18 All-Americans.

Sophomore offensive lineman Trey Smith has garnered some much-deserved preseason hype after a standout freshman season for the Tennessee Vols in 2017 where he earned Freshman All-America honors by the FWAA and 247Sports and was named All-SEC second team by the coaches and the media.

The Jackson, Tennessee, native was the only UT offensive lineman to start all 12 games last season and became the first Vols’ freshman to start at left tackle in over 30 years.

This year, Smith has been tabbed a preseason All-SEC first team selection by the coaches and media as well as being named to the Outland Trophy watch list.

The Tennessee Athletic Department and the University of Tennessee Alumni Affairs Office are partnering with Elevate Lifestyle to host the official Big Orange Tailgate in Charlotte on Saturday from 10:30am to 1:30pm CT, prior to kickoff.