Nashville, TN – This week the Tennessee Titans and the Miami Dolphins will renew a rivalry that began in 1966, when the Dolphins entered the American Football League. The Titans are 17-20 all-time against Miami, including a playoff victory in 1978.

This week’s contest marks the fourth all-time season opener for the Titans/Oilers against the Dolphins and the first such occasion since September 11th, 2004, when the game was played in South Florida a day early due to the approaching Hurricane Ivan. The Titans won that day by a final score of 17-7. 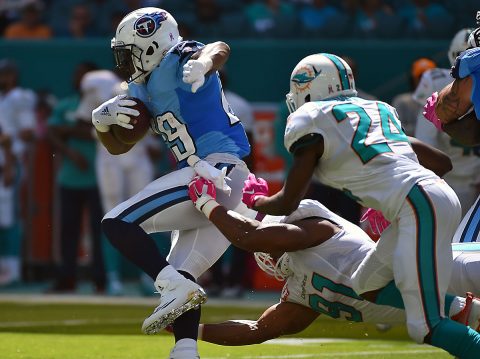 Seven of the last nine regular season meetings have been played at Hard Rock Stadium, beginning with the 2004 season opener. It took until eight years later, on November 11th, 2012, for the Titans to win again at Miami, when they forced four turnovers en route to a 37-3 victory.

The score tied for the 12th largest margin of victory in Titans/Oilers history. The last time the Titans won at Miami was October 9th, 2016, when Marcus Mariota passed for three touchdowns and added a rushing score in a 30-17 win.

Jay Cutler completed a touchdown pass to Jarvis Landry late in the fourth quarter to help the Dolphins triumph 16-10.

The last meeting at Nissan Stadium occurred on October 18th, 2015, when the Dolphins pulled away for a 38-10 win. The Dolphins forced four turnovers and produced six sacks on defense in the contest, while on the other side of the ball they generated 434 total yards, including 180 rushing yards.

The teams have met in the postseason just once. In 1978, the Oilers defeated the Dolphins 17-9 at the Orange Bowl for Houston’s first playoff win since 1961. The Oilers continued their postseason play on the road, winning at New England before falling to Pittsburgh in the AFC Championship Game.

Earlier in the 1978 season, the Oilers and the Dolphins were featured in a memorable Monday Night game, a 35-30 Oilers win that included four rushing touchdowns by Earl Campbell.

2012 Week 10 • Nov. 11, 2012 • TITANS 37 at Dolphins 3
The Titans scored the game’s first 21 points, including a nine-yard touchdown pass from Jake Locker to Kendall Wright and a 17-yard touchdown run by Chris Johnson. Locker, in his first start in six weeks due to a shoulder injury, added a 26-yard touchdown pass to Jared Cook in the third quarter.

Johnson totaled 126 yards on 23 carries. The Titans forced four turnovers and intercepted Dolphins rookie Ryan Tannehill three times, including an interception by Colin McCarthy that he returned 49 yards for a touchdown.

2015 Week 6 • Oct. 18, 2015 • DOLPHINS 38 at Titans 10
The Dolphins force four turnovers and record six sacks. Miami defensive end Cameron Wake records four sacks and two forced fumbles in the first half. The Dolphins rush for 180 yards, including 113 yards and a touchdown by Lamar Miller.

2016 Week 5 • Oct. 9, 2016 • TITANS 30 at Dolphins 17
The Titans rush for 235 yards on 41 carries, including 121 rushing yards from DeMarco Murray and 60 from Marcus Mariota. Mariota passes for three touchdowns and rushes for another score. The Titans sack Ryan Tannehill six times—two each for Derrick Morgan, Brian Orakpo and Jurrell Casey.

Jason McCourty and Daimion Stafford record interceptions, while the Titans do not turn the ball over. The Dolphins score on a 74-yard punt return by Jakeem Grant. The Titans record a time of possession of 36:44.