Dodging the Roadkill: Biker Down

Clarksville, TN – From the very beginning of this journey, experienced bikers have told me, it’s not IF but WHEN you’ll have an “incident.”

Well, Monday was my day.

I’ve dropped a bike four times in my brief riding career (3 years).  The only other time I went down was in Arkansas, when I overshot a corner and slid into a rain filled ditch.  No injuries and no damage to the bike.  I was muddy, but lucky.

Today, I lost it in a corner and off the road I went, sliding into the brush and coming to a stop about six feet off the pavement.  I STILL don’t know how and why I lost it.  I was with a group of five other riders and we were just cruising along, when all of a sudden, I ran out of pavement. 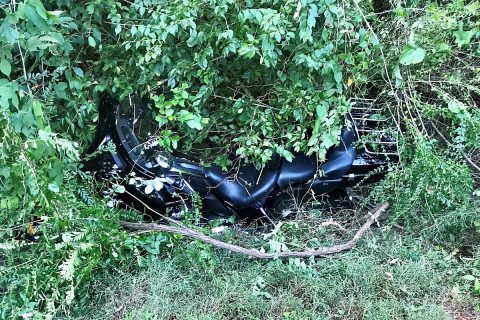 I laid there for a few minutes, unable to get my foot from underneath the bike and doing a mental check of my situation.  Once I got my foot free, I wanted to stand up.  Riding with two firefighters, they kept telling me to “stay put, don’t move.”

My left leg took the brunt of the fall and it was hurting real bad.  I wanted to see if I could put any weight on it.  I finally stood up and and there appeared to be no serious injury.  Nothing broken.

Now the embarrassment set in and the guilt of having halted the group ride we had just begun, and to be honest, I was more worried about my bike.  Was it damaged, was it totaled, what happened?  I kept looking at it, peering through the ambulance window, waiting on word from my brothers about the damage.

I have to admit, for the last couple of weeks, my confidence into the corners hasn’t been that sharp.  I’ve noticed it and it’s made me feel a little unsure of myself.  Most of the time, I ride by myself, so I’m extremely cautious, but for some reason, I haven’t been “seeing” through the corners like I’m accustomed to.  I don’t understand it, but I’ll figure it out. 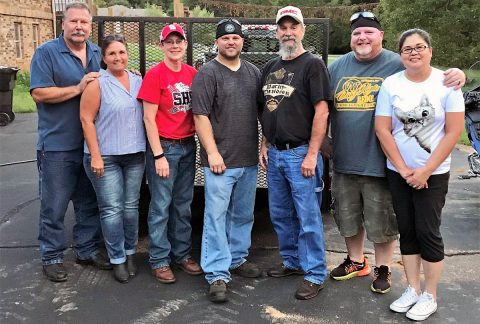 I’ve heard all the stories of other bikers going down and the tragedies of those who have died, but I’ve accepted the risks and ride on.  But this one was clearly PILOT ERROR.  And what about those last few seconds before impact?

So I’m able to tell this tale no worse for wear.  My left leg is swollen like a melon from the knee down, but nothing broken.  Just broken pride.

Now let me thank the real superstars who were there for me:

First, the Clarksville Police Department, Clarksville Fire Rescue, and Montgomery County EMS.  From the moment I hung up from 911, they were there, literally, within three minutes.  Since my son is a firefighter, all the Fire/Rescue guys knew me, and I knew them.  It was comforting to see them and brought me to tears.

The EMS guys were AWESOME!  They checked me out and offered to take me to the hospital, but I didn’t think it was necessary.  And the Police were amazing.  All of them were incredible.  We should ALL be thankful for them.  You never realize it until you need them.

We had just begun a night ride when I ruined the night.  Jay Christoffer, Steven Wall, Jon Robinson, Curtis Barnes, Cindy Richards, Sue Christoffer, and Eden Barnes were my crew.  I can’t thank them enough for being there for me.

These guys kept me calm, and kept me cool and they all helped pull my bike out of the woods.  The bike suffered a little damage, but it’s easily fixable.  Much thanks to Steven Wall who went and got his truck and trailer and brought both of us home.

I would also like to thank Bill Langford, who is the GODFATHER of all bikers in our area.  He had heard about the wreck and tracked down my phone number and was the first to call and check on me.  I’ve known Bill for a lot of years, and I’ll always be grateful for his call.

I’m not sure what I’ve learned from this.  I’m still trying to process what went wrong.  As I said above, I’ve been a little less confident into the corners and I’m not sure why, but, I’ll figure it out.

So, how was your weekend?