Clarksville, TN – After a promising start to the fall slate at last week’s GolfWeek Program Challenge, Austin Peay State University men’s golf will make a shorter trek down Interstate 40 to participate in the Memphis Tiger Intercollegiate, hosted by the University of Memphis at Colonial Country Club. 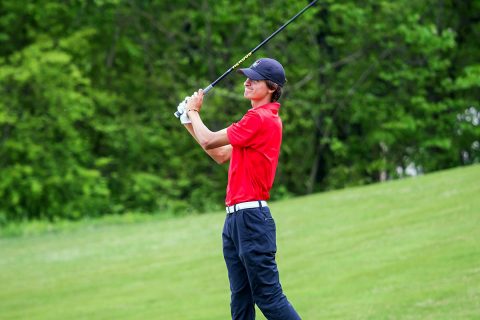 The two-day event begins with a shotgun start 8:30am, Monday with 36 holes, followed by an additional 18 holes on Tuesday on the par-72, 7,235-yard course. Temperatures are expected to be in the low-90s with sunny skies and light winds both days.

In addition to the Govs and host Tigers, the field is beset with athletes from two Ohio Valley Conference schools (Belmont and Tennessee State) as well as Chattanooga, Houston Baptist, IUPUI, North Alabama, Oral Roberts and Stetson. Austin Peay will be paired with Houston Baptist and Belmont in Round One, and are scheduled to tee off on Holes 4-8.

Four members of the Governors who competed at Pawley’s Island will be back in action this week, with junior Alex Vegh [1] and freshman Micah Knisley [2] slotting into the top of the lineup after outstanding showings at True Blue Resort. Vegh was the only Gov to shoot par or better in all three rounds, while Knisley’s top-20 made him the third Gov in the last two seasons to debut with a top-20 finish.

The two top-20 finishers in their collegiate debuts last season—Chase Korte [3] and Garrett Whitfield [4]—are now sophomores and will be back in the lineup this week. Korte hopes to acquire a few more birdies in this tournament after leading the GolfWeek event with 41 pars, while Whitfield hopes to parlay a final-round 69 into a strong start in the Bluff City.

Junior Austin Lancaster [5] will make his season debut this week as the No. 5 in the lineup, while senior Sean Butscher [6] also will make the journey to Memphis to represent Austin Peay as the individual.

Live scoring for this event will be provided courtesy of BirdieFire.com. A complete recap will be available at the end of each round via LetsGoPeay.com and live updates can be found on Twitter (@AustinPeayMGO).