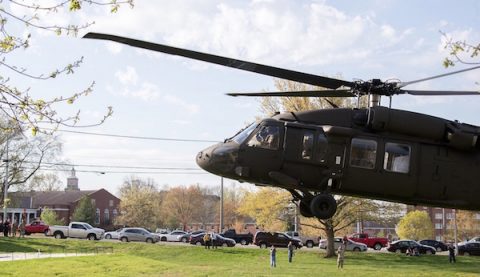 The helicopters will land on the Dunn Center lawn around 10:00am, weather permitting, and APSU cadets will spend the next three hours conducting loading and off-loading training. The aircraft will depart at approximately 1:00pm.

The University’s Governors Guard ROTC program is one of the best programs in the nation, having won an unprecedented seven MacArthur Awards.

That award, presented by Cadet Command and the General Douglas MacArthur Foundation, recognizes the top eight programs in the country each year. The award is based on a combination of the achievement of the school’s commissioning mission, its cadets’ performance and standing on the command’s National Order of Merit List and its cadet retention rate.

To view the landings and training on Friday, spectators are asked to do so from the sidewalk across the street from the APSU Dunn Center.