Nashville, TN – The Jacksonville Jaguars are the Tennessee Titans’ longest-standing division rival. The clubs have met at least twice each year since Jacksonville began play as an expansion franchise in 1995. For the first seven seasons of the rivalry they played in the AFC Central, and for the last 17 years they have been members of the AFC South.

The teams have met a total of 47 times, with the Titans holding a 27-20 advantage.

For eight consecutive seasons (2009–2016), the Titans and Jaguars split the annual series before Tennessee took both matchups in 2017. 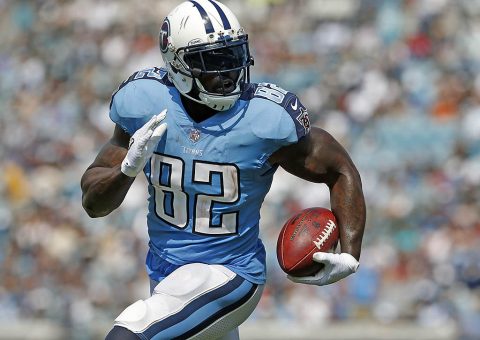 Tennessee Titans running back Derrick Henry (22) runs outside for a touchdown during the second half of a football game against the Jacksonville Jaguars at EverBank Field on September 17th, 2017. (Reinhold Matay-USA TODAY Sports)

The Tennessee Titans won the first matchup of 2017 in Jacksonville, played on September 17th. The Titans scored 31 points in the second half, pulling away for a 37-16 victory. Derrick Henry rushed for 92 yards and a touchdown in the win.

In the 2017 rematch at Nissan Stadium on New Year’s Eve, with the Jaguars having already clinched the AFC South, the Titans clinched a playoff berth of their own with a 15-10 victory. Marcus Mariota completed a 66-yard touchdown pass on a screen to Henry, and the Titans defense forced four turnovers, including a pair of interceptions by safety Kevin Byard.

The 2017 finale was the second time in as many years a late-season Titans-Jaguars game has had postseason implications. On December 24th, 2016, the Titans traveled to Jacksonville needing a win to keep their playoff hopes alive. It was not to be, as the Jaguars turned them away 38-17.

The stakes of the rivalry were never higher than in 1999, when the Titans and Jaguars met three times, including the AFC Championship Game in Jacksonville. Steve McNair rushed for two touchdowns and Derrick Mason returned a kickoff 80 yards for a touchdown as the Tennessee Titans earned their first Super Bowl berth with a 33-14 win. Tennessee went on to Super Bowl XXXIV and eventually fell at the hands of the St. Louis Rams, 23-16.

The Jaguars played their first game in franchise history against the then-Houston Oilers on September 3rd, 1995. In Jacksonville, the Oilers won the game by a 10-3 final score

2015 Week 13 • Dec. 6, 2015 • Jaguars 39 at TITANS 42
Marcus Mariota passes for three touchdowns and adds an 87-yard rushing touchdown to outduel Jaguars quarterback Blake Bortles, who passes for 322 yards and five touchdowns. The teams combine for 41 points in the fourth quarter.

Linebacker Wesley Woodyard scores what proves to be the deciding points on a three-yard fumble return. Allen Robinson catches 10 passes for 153 yards and three touchdowns for the Jaguars, while Dorial Green-Beckham contributes 119 yards and a touchdown on five catches for the Titans.

2016 Week 8 • Oct. 27, 2016 • Jaguars 22 at TITANS 36
In a Thursday night game, the Titans score 27 points and shut out the Jaguars in the first half. The Titans score on six consecutive possessions. Marcus Mariota completes 18 of 22 passes for 270 yards with touchdown passes to Kendall Wright and Rishard Matthews.

DeMarco Murray accounts for 123 of the team’s 214 rushing yards, and he and rookie Derrick Henry (60 rushing yards) each run for a touchdown. The Titans total 494 yards on offense and convert 60 percent on third down.

Titans starter Marcus Mariota leaves the game late in the third quarter with a right leg injury and is relieved by Matt Cassel. Jason Myers boots four field goals for the Jaguars. Jaguars cornerback Jalen Ramsey caps the victory with an interception return for a touchdown.

2017 Week 2 • Sept. 17, 2017 • TITANS 37 at Jaguars 16
After falling behind 3-0, the Titans score the game’s next 30 points and finish six consecutive possessions with scores. The Titans’ tally includes 31 points in the second half. The Titans defense recovers a Blake Bortles fumble and gets interceptions from Da’Norris Searcy and Curtis Riley.