The Govs (6-2-1, 1-0-1 OVC) currently sit atop the Ohio Valley Conference standings with four points from their opening weekend (Draw vs Belmont, win vs Tennessee Tech). 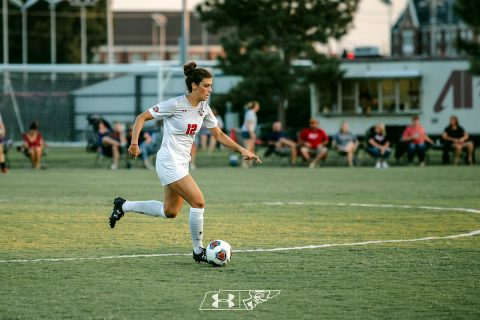 In addition, the Govs head into this weekend boasting the OVC Offensive Player of the Week in Claire Larose [1]. Larose scored both goals for the Govs last weekend, bringing her season total to five, which is good for second in the conference.

The Govs were only 1-6-1 overall on the road last year and made improving their road performances a major focus, which has resulted in a 2-2 record so far this year, with wins over Evansville and Mercer.

The Cougars (2-5, 1-1 OVC) have not had the greatest start to their season, but played some tough opponents on their non-conference schedule. The Cougars did win their conference-opener, however, winning on the road, 2-1, against Eastern Kentucky before losing to Morehead State, 1-0, in their most recent outing.

Forward Amanda DiNardo leads SIUE with three goals this season as well. The Govs lead the all-time series, as they have a 6-2-3 record against the Cougars, including a 2-1 win in Clarksville last season. Senior Jennifer Smith [2] scored from the penalty spot in the match last year.

The Panthers (2-4-3, 1-0-1 OVC) are currently tied with the Govs for the early lead atop the OVC Standings, although that could change before the two teams even play each other. EIU hosts Murray State on Friday, before doing battle with the Govs on Sunday.

The Panthers went on the road with resounding success, defeating Morehead State, 1-0, and then earning a hard-fought scoreless draw with Eastern Kentucky.

The Panthers have a very balanced offense, with three players leading the team with two goals. All three of these players also have one assist to their names, giving them five total points on the year.

The SIUE match will be broadcast on the OVC Digital Network, as well as having live stats.

EIU will also provide live stats for fans to follow along with.