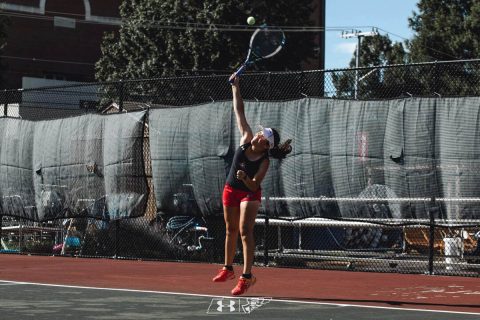 Yanes Garcia then started her singles tournament against Michigan’s Giulia Pairone, who received an At-Large bid, but was the tournament’s No. 8 overall seed.

After the two players traded games back and forth, Yanes Garcia had chances to prolong the first set, but Pairone was able to take the first set, 6-4. Pairone got off to another quick start in the second set, going up 2-0 early on.

“I was pleased with how Lidia competed and am very proud of her,” said Governors head coach Ross Brown [2]. “I want her to be more assertive on game points. She had three of them to level the first set and was a little passive and that hurt her. After the first set when her opponent was in front, it became hard to stop her momentum. However, whoever Lidia plays tomorrow will be in for a physical match.”

Yanes Garcia moves to the consolation draw, where she will play Maria Siopacha of George Washington University. A time for the match has not been released, but it will take place in the morning.