Glencoe, AL – Austin Peay State University (APSU) Women’s Golf junior Meghann Stamps [1] offered a statement round to open the Chris Banister Classic at Silver Lakes Golf Course; the Hendersonville native is tied for second after the opening round, and her performance has the Govs in third after 18 holes. 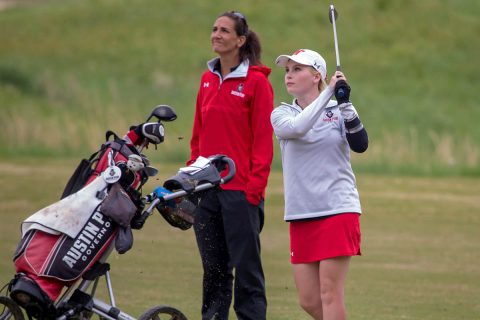 At 313, the Govs are behind only host Jacksonville State (301) and Murray State (304) after the opening round. A second quintet of Gamecocks are in fourth (315) and Tennessee Tech (324) rounds out the top five.

Stamps’ opening-round 73 trails only Jacksonville State’s Paula Vega (69) for the overall lead. She led the Govs in par-4 (4.10/hole) and par-5 (5.00/hole) scoring, and dropped a team-high three birdies in the opening round.

A pair of upperclassmen aided the Austin Peay cause, with seniors Taylor Goodley [2] and Reagan Greene [3] both on the fringes of the top-10 with match 79s. the duo are tied for 13th, with Goodley posting a dozen pars over the first 18 holes.

Freshmen Taylor Dedmen [4] and Shelby Darnell [5] are on pace for another top-20 finish; both fired 82s in the opening round to sit tied for 19th, with Darnell leading this tournament in par-3 scoring (2.75/hole) after leading the Greenbrier Invitational in par-5 scoring last week.

In her first appearance this fall, sophomore Andrea Presilla [6] opened the campaign with an 87 to place 30th. The tournament—initially a play-six, count-four format—was changed to a standard play-five, count-four tournament, leaving Presilla to represent the Govs as an individual this week.

The Govs return to the Robert Trent Jones course again tomorrow for round two, with Austin Peay teeing off alongside Tennessee Tech, beginning 7:30am (CT).