Athens, GA – Tennessee Vols Football scored two second-half touchdowns to pull within 12 points, but a late push by No. 2/3 Georgia proved to be too much for the Volunteers in a 38-12 defeat at Sanford Stadium.

“We have fight in us, and we’re not going to quit,” Tennessee head coach Jeremy Pruitt [1] said. “It kind of gets me excited. These guys on this team have had a lot of negatives go against them for awhile, and I’m proud of them for the way they fought.

“And it isn’t easy. Our guys kept fighting, which means we’re headed in the right direction and that excites me.” 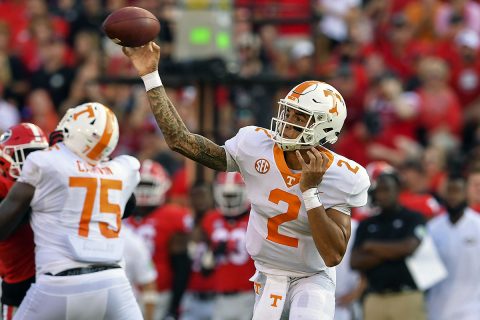 Georgia quarterback Jake Fromm completed 16 of 22 passes for 185 yards. Running back Elijah Holyfield led the Bulldogs in rushing with 78 yards on 16 carries, while backup quarterback Justin Fields scored twice on the ground.

With 11:10 remaining in the final quarter, Chandler took a screen pass from Guarantano 35 yards for a touchdown. The score completed a five-play, 57-yard drive and cut Georgia’s lead to 24-12 after Tennessee was unsuccessful on the two-point conversion. 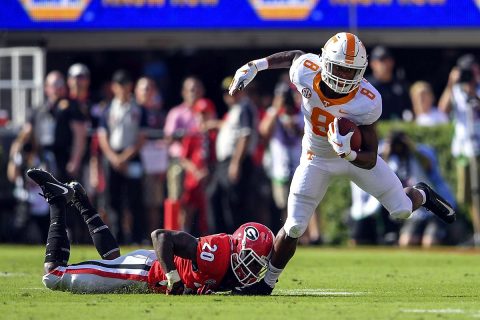 Tennessee Volunteers running back Ty Chandler (8) tries to escape a tackle by Georgia Bulldogs defensive back J.R. Reed (20) during the first half at Sanford Stadium. (Dale Zanine-USA TODAY Sports)

On Georgia’s ensuing possession, the Bulldogs took the ball 75 yards in 13 plays while chewing up more than seven minutes of game clock in the process to extend their lead to 31-12. UGA scored once more on its next drive to bring the final score to 38-12.

The Bulldogs got the scoring started with an eight-play, 86-yard drive, capped off by a 31-yard touchdown fumble advance by tight end Isaac Nauta with 8:52 remaining in the opening frame. Tennessee linebacker Darrell Taylor [5] penetrated the backfield and forced a fumble by Fromm, but Nauta scooped up the loose ball and took it in for the score.

After the two teams exchanged punts, a defensive stand by the Vols forced a 43-yard Georgia field goal by Rodrigo Blankenship, which capped a nine-play, 35-yard drive by the Bulldogs.

Georgia got the ball back following a Joe Doyle [6] punt, but was stifled by the Tennessee defense after five plays. The Vols gained a first down before punting the ball back to the Bulldogs.

Georgia then marched 70 yards in 12 plays, capped by a one-yard touchdown run by D’Andre Swift with 30 seconds left in the first half that extended its lead to 17-0 at halftime.

After the Bulldogs opened the second half with a 75-yard drive that resulted in a touchdown run by Fields from 12 yards out, Tennessee responded with a score of its own.

On the ensuing possession, the Tennessee defense forced a Georgia punt. The Bulldogs were held at bay partially thanks to a sack by Taylor – his third of the day. Taylor’s three sacks stand as the most by a Tennessee player in a single game since October 29th, 2016 – when former Vol and current Philadelphia Eagles defensive end Derek Barnett also had three.

The Tennessee Vols then moved the ball into Georgia territory before the Bulldogs forced a punt by Doyle, but the Tennessee Vols quickly got the ball back after forcing a three-and-out on defense. That defensive stop led to Chandler’s scoring catch.

Following next week’s open date, Tennessee returns to action on Saturday, October 13th, at No. 10 Auburn (3-1, 1-1 SEC). The game marks the Tennessee Vols’ first trip to Auburn since 2008.