Nashville, TN – The Tennessee Titans and the Baltimore Ravens have developed a fierce rivalry over the course of 22 all-time meetings since the series originated in 1996, including three playoff battles. The frequency of the encounters has slowed, however, with the clubs playing only three times since the start of the 2009 season.

Each team has won 11 times in the highly competitive series. Of the 22 games the teams have played against each other, 12 have been decided by four points or less, with the Titans holding a 7-5 advantage in those meetings. 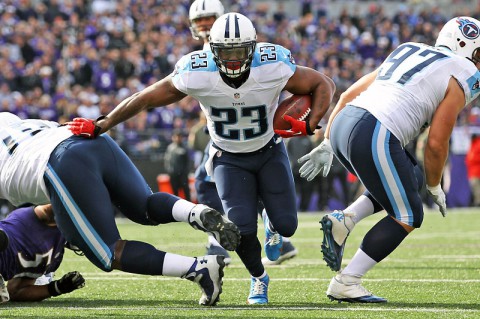 Tennessee Titans running back Shonn Greene (23) carries the ball against the Baltimore Ravens in the first half at M&T Bank Stadium on November 9th, 2014. (Mitch Stringer-USA TODAY Sports)

The two teams played together in the AFC Central Division for six seasons after the Ravens relocated to Baltimore from Cleveland in 1996.

Realignment in the league in 2002 took the Titans to the AFC South and the Ravens to the AFC North, ending their twice-yearly meetings. In the nine games since realignment, the Titans own a 5-4 edge.

This is the second consecutive season in which the Titans have hosted the Ravens. They met at Nissan Stadium in Week 9 of the 2017 campaign (November 5th). The Titans prevailed 23-20, as Marcus Mariota passed for two touchdowns and safety Kevin Byard recorded two interceptions in the win.

The last time the Titans and Ravens met at M&T Bank Stadium was Week 10 of 2014. In that game, Justin Forsett’s 112 rushing yards and two touchdowns helped defeat quarterback Zach Mettenberger and the Titans, 21-7.

The Titans controlled the majority of the outcomes for the first five years of the series, winning six out of their first nine games. Then, in 2000, the Ravens stole the momentum. Despite owning the NFL’s best record at 13-3, the Titans lost to the Ravens at Nissan Stadium in the regular–season the Titans’ first-ever loss at their new stadium–and then again in a Divisional Playoff game the same year. The playoff win launched the Ravens to their eventual Super Bowl XXXV Championship.

Five years later at Nissan Stadium, the two clubs met again in the playoffs, this time in the 2008 Divisional Round. Matt Stover’s 43-yard field goal with less than a minute on the clock provided the Ravens a 13-10 victory.

2008 Divisional Playoff • Jan. 10, 2009 • RAVENS 13 at Titans 10
Matt Stover’s 43-yard field goal with under a minute to play gives the Ravens a win against the AFC’s top seed. Despite being outgained 391-211 in totals yards and gaining nine first downs to Tennessee’s 21, Baltimore forces three turnovers, all as the Titans drive inside their 30-yard line.

Titans receiver Justin Gage catches a career-high 10 balls for 135 yards. Tennessee holds Baltimore to 50 rushing yards on 30 carries. Titans running back Chris Johnson has 100 scrimmage yards and a touchdown in the first half but does not play in the second half due to an injury.

2011 Week 2 • Sept. 18, 2011 • Ravens 13 at TITANS 26
Matt Hasselbeck passes for 358 yards (30 of 42). Kenny Britt catches nine passes for 135 yards and a four-yard touchdown. The Titans defense records three sacks and three turnovers. The Titans’ total of 432 net yards are the most ever by the Titans in a game versus the Ravens. Ravens running back Ray Rice scores on 31-yard pass but is limited to 43 rushing yards.

The Titans convert on all three chances in the red zone. The Ravens outgain the Titans 341 to 257 and limit the Titans to 27 percent on third down.