Auburn, AL – Fresh off a bye week, the Tennessee Vols hits the road this weekend for a rare trip Auburn to take on the 21st ranked Tigers at Jordan-Hare Stadium.

Kickoff for Saturday’s contest is slated for 11:00am CT on the SEC Network with Dave Neal (play-by-play) and D.J. Shockley (analyst) calling the action in the booth while Dawn Davenport will be reporting from the sidelines. Vol Network radio affiliates will have a live audio broadcast with Bob Kesling [1], Tim Priest and Brent Hubbs. Sirius (Channel 81) and XM satellite radio (Channel 81) will also carry the game. 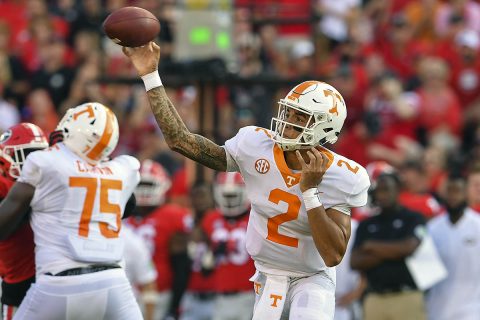 The Big Orange will look to grab their first SEC victory this season during their trip to the Plains after dropping their first two conference games to Florida and Georgia.

Tennessee should be well rested coming off its bye week while the Tigers are looking to bounce back from a 23-9 loss at Mississippi State last Saturday.

Saturday’s game will be the first noon road game for the Tennessee Vols since September 27th, 2014 at Georgia and the first 11:00am kickoff in the central time zone since November 14th, 2009 at Ole Miss.

Series History vs. Auburn
Saturday will be the 53rd meeting between the Volunteers and Tigers but just the 11th time the two programs have faced off in Auburn.

The Tigers lead the all-time series with a 28-21-3 record, including a 7-2-1 mark at Jordan-Hare Stadium. Seven of the last 10 meetings in the series have been decided by 10 or fewer points.

Saturday will mark Tennessee’s first trip to Auburn since 2008 and the first matchup between the two programs since 2013. The Vols will be looking to snap a six-game skid against the Tigers. The Tennessee Vols’ last win over Auburn came back in 1999 when the Vols posted a 24-0 shutout victory in Knoxville.

Tennessee Vols Coaching Connections
There are quite a few connections between the two coaching staffs this weekend. The Tennessee Vols have two assistants that played for the Tigers in defensive line coach Tracy Rocker [2] (1985-88) and special teams coordinator/safeties coach Charles Kelly [3] (1986-89), while Auburn defensive coordinator Kevin Steele is a 1979 UT graduate and a former assistant coach for the Vols.

Rocker was one of the greatest defensive players in Auburn history, earning SEC Defensive Player of the Year honors in addition to winning the Outland and Lombardi Trophies as a senior in 1988. The former All-American also spent time as the Tigers’ defensive line coach from 2009-10.

Kelly played defensive back under former Tigers’ coach Pat Dye. His senior class put together a four-year record of 39-7-2 while participating in four bowl games.

Bright Future for Young Tennessee Vols Offense
Tennessee’s offense continues to show improvement despite being one of the youngest units in all of college football. The Vols are the only team in the FBS that has not had at least one senior record a start on the offensive side of the ball this season. They are also one of just 11 teams nationally that have not had a senior log a start along the offensive line.

Graduate transfers Keller Chryst [7] and Madre London [8] as well as walk-on Malik Elion [9] are the only three UT seniors to log snaps on offense this season.

Despite its youth, the Tennessee offense has recorded six plays of 50 or more yards this season, which has already surpassed last season’s total of four

Chandler Does it All
Vols’ sophomore running back Ty Chandler [10] has showcased his wide variety of skills so far this season. The Nashville native leads Tennessee with 61.8 rushing yards per game and ranks fifth in the SEC in yards per carry (6.2).

In UT’s last game at No. 2 Georgia, Chandler caught a touchdown pass and led the team with four catches for 53 yards while also leading the team in rushing yards. His 81-yard touchdown run in the Vols’ win over UTEP earlier this year is the longest rush in the conference this season.

Taylor Looking to Build Off Big Day
Tennessee Vols Redshirt junior Darrell Taylor [11] will look to build off his breakout performance at No. 2 Georgia two weeks ago. The outside linebacker set career highs by recording three sacks and two forced fumbles against the Bulldogs. His three sacks were the most by a Tennessee player since former All-American Derek Barnett had three at South Carolina on October 29th, 2016.

The Tigers enter Saturday’s contest ranked No. 21 in both the AP Poll and the Amway Coaches’ Poll and will be looking to rebound from a 23-9 road loss at Mississippi State last week in which they were held out of the end zone.

The defense is spearheaded by the linebacker duo of Deshaun Davis and Darrell Williams. Davis paces the team in tackles (53) and tackles for loss (7.5) while Williams has posted 39 tackles and five tackles for loss himself.

The Tigers’ defensive line is also dangerous with the duo of Marlon Davidson and Derrick Brown leading the way. The two have combined for 51 tackles, 6.5 tackles for loss, 3.5 sacks and nine quarterback hits this season.

AU has struggled offensively in recent weeks but has the potential to be explosive in the running and passing game. Junior quarterback Jarrett Stidham leads the offense with 1,177 yards passing and five touchdowns. He’ll spread the ball around as his five touchdown passes have gone to five different receivers.

The Tigers also have numerous weapons when it comes to running the ball as four different players have scored multiple touchdowns on the ground, led by redshirt freshman running back JaTarvious Whitlow, who leads the team with 414 yards rushing and four touchdowns.