Clarksville, TN – The Nashville Predators came storming back against the New Jersey Devils to win an overtime thriller, 4-3.  Playing on the road, the Predators were hoping to bounce back from their disappointing home loss to the San Jose Sharks over the weekend.

Playing from behind most of the night, the Devils scored first at 2:58 of the first period when Damon Severson scored on a wicked slap shot that beat Nashville goalie, Juuse Saros, 1-0.  Saros is still in goal while Pekka Rinne recovers from an undisclosed injury. 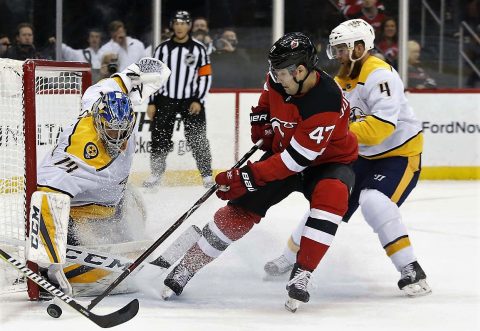 Yannick Weber brought the Predators even at 14:40 of the first period on a goal that beat New Jersey goaltender, Keith Kincaid, and the game was tied, 1-1.  The puck bounced off of the glove of Kincaid for the score.  Weber was assisted on the play by Kevin Fiala.

New Jersey came right back at 19:01 of the first when Nico Hischier tipped in a rebound off of Saros and the Devils took the lead, 2-1.

Viktor Arvidsson then brought Nashville even at 13:06 of the second period with a beautiful slap shot that beat Kincaid and the teams were tied, 2-2.

Hischier then gave the Devils the lead once again for his second goal of the night on a tip-in past Saros and the score was 3-2, Jersey.

The Predators kept battling back throughout the night against a very fast Devils line-up and Filip Forsberg tied the contest at 3-3 on a wrister past Kincaid, at 13:40 of the final frame.

Nashville had to kill a penalty with less than five minutes to play and depended on Saros to keep them in the contest with a couple of magnificent saves to keep the teams even.

The teams ended regulation play tied at 3-3 and were forced to overtime.

Kyle Turris ended the mystery at 3:35 of the overtime period with an unassisted goal and the Predators get the win and the two points on the night.

Nashville returns to the Bridgestone Arena for a Saturday afternoon matinee game, hosting the Edmonton Oilers at 2:00pm.