Clarksville, TN – A punishing Austin Peay State University (APSU) football defense rocked Eastern Kentucky for 11 stops behind the line and junior Kentel Williams [1] piled up more than 170 all-purpose yards against the Colonels, but the opportunistic visitors took advantage of fortunate bounces to escape Fortera Stadium with a 17-13 victory, Saturday. 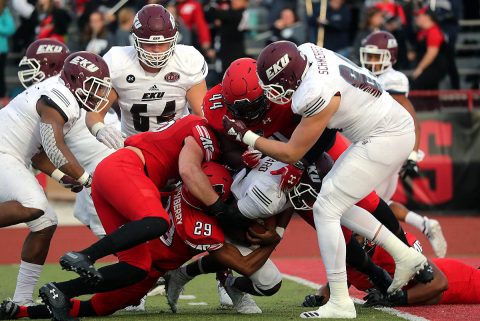 Austin Peay (4-5, 2-4 OVC) was uncharacteristically unable to control the clock; despite averaging better than 5.0 yards per carry, Eastern Kentucky (5-4, 4-2 OVC) racked up nearly 37 minutes in time of possession to control the flow of the game.

The Govs knifed through the Colonel defense on the game’s opening drive. Williams broke the drive open with a 38-yard scamper to inside the Eastern Kentucky 10-yard line, with sophomore quarterback Jeremiah Oatsvall [2] scoring from five yards out two plays later to put the Govs up a score early.

The Colonels answered Austin Peay’s opening salvo with a nine-play drive of their own. Alphonso Howard engineered the drive under center for the Colonels, keeping Eastern Kentucky on the field with his feet by picking up 15 yards on third-and-eight to get into Austin Peay territory. However, the Govs put a stop to the drive inside the red zone and the Colonels were forced to settle for a 35-yard Sam Hayworth field goal.

Eastern Kentucky’s final first-quarter drive started on their own 41-yard line and quickly moved into Austin Peay territory, but was snuffed out by sophomore Kordell Jackson [3], who stepped in front of a Howard pass and secured his season’s second interception to halt the Colonels march.

The teams exchanged punts to open the second quarter before Austin Peay, after reversing field with a quality Devin Stuart [4] punt and a personal foul on Eastern Kentucky and the Colonels going three-and-out, engineered a quick march for a field goal. On the drive’s second play, Oatsvall took off and picked up 30 yards, which set up junior Logan Birchfield [5] for a 45-yard field goal attempt; the Elizabethton, Tennessee native nailed it to equal his career-long.

Austin Peay’s next drive—on a short field following a Malik Davis [6] interception near midfield—saw Oatsvall find sophomore Gorel Soumare [7] twice, for nine and 11 yards, and set up another Birchfield attempt. The second try was good from 43 yards to make it a two-score game; 13-3 also served as the halftime score after a last-second Hayworth field goal attempt from 51 yards out missed wide right.

Eastern Kentucky got the ball to open the second half and seemed on the verge of putting something together. After being bottled up much of the first half, both Daryl McCleskey and LJ Scott broke off 23-yard runs, moving the Colonels inside the Austin Peay five-yard line.

However, Hayworth missed for a second time when his 25-yard attempt hit the left upright, leaving the Colonels with nothing to show for an 11-play, 65-yard drive.

However, the pendulum swung back in the Colonels favor two plays into the ensuing drive; that’s when Leodis Moore III made a leaping, one-handed interception and returned it 35-yards for a score to bring the visitors back within a field goal.

After a three-and-out, Eastern Kentucky seemed to stumble when Howard was forced to leave the game with a leg injury; Parker McKinney stepped in under center for the Colonels, who fed the Govs a steady diet of the run game to get back inside the Austin Peay 20-yard line, helped by an unsportsmanlike conduct penalty for an additional 15 yards. However, Scott ran into a stout Governor line on three straight plays, the last on fourth-and-two for no gain, with Jackson making the stop, to turn the ball back over to the Govs.

The ensuing Austin Peay drive saw the Govs march to midfield before another exemplary Stuart punt was down inside the Eastern Kentucky five-yard line. McKinney, the back-up quarterback, was turned loose and found Neiko Creamer for 18 yards and Jackson Beerman for 20 on back-to-back third-down chances to move to midfield. However, once more Austin Peay got a fourth-and-short stop, this one by Corey Brown Sr. [9], to take over in even better field position.

The Govs moved into Colonel territory but on fourth down, a desperation Oatsvall pass instead found Moore III for the pick. A third fourth-and-short attempt by Eastern Kentucky saw the Colonels finally find a crack in an Austin Peay defense that was on the field for nearly 20 second-half minutes, when McCleskey scampered for 13 yards.

McKinney found Beerman for 14 yards, got a roughing the passer penalty and finally hit Dan Paul from 20 yards out to put the Colonels up four.

The Govs ensuing drive saw them pick up big chunks—11 rushing yards by Williams, followed by back-to-back 11-yard bursts by Oatsvall—but stalled in Colonel territory and ultimately saw the ball back to Eastern Kentucky after a holding penalty negated a Williams first-down run.

By the time Austin Peay got the ball back, it was down to desperation plays and the Govs’ prayers went unanswered on this night.

Williams had his typically efficient night, rushing for 83 yards on 12 carries, catching one pass for two more and returning three kicks for 87 yards, totaling 172 in all. Oatsvall also added 73 yards on the ground.

Defensively, junior Trent Taylor [11] and senior Gunnar Scholato [12] led the way with 10 tackles apiece, with Scholato leading all players with 2.5 tackles for loss. In addition to his interception, Jackson had two tackles for loss and seven solo stops, while seniors Nate Howard [13] and Pat Walker [14] had 1.5 TFL apiece.

The Govs return to action for their final 2018 road appearance Saturday, November 10th, with a visit to Eastern Illinois; kickoff is scheduled for 1:00pm.