West began her visit with a meeting with the 101st Airborne Division (Air Assault) Acting Senior Mission Commander, Brig. Gen. Todd K. Royar, followed by a round table discussion at 101st Airborne Division (Air Assault) headquarters with brigade command team leaders to personally ensure they are getting what they need from Army Medicine to support medical readiness for their Soldiers. 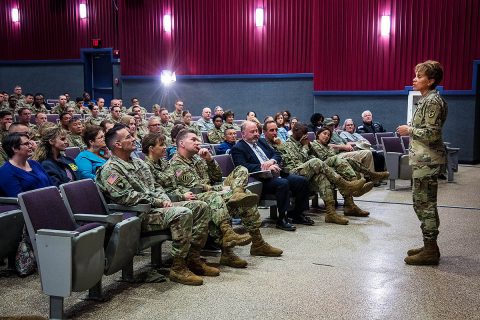 “When we go around [the Army] one of the things Command Sgt. Maj.[Michael A.] Gragg and I insist upon doing is meeting with the command teams on the installations because that’s a perspective that we need, to make sure we’re providing the support that they deserve. We can’t know that unless we hear it from them,” said West.

She said that medical readiness is the top priority for Army Medicine because if Soldiers are not medically ready to deploy it will impact the Army’s overall mission to deploy, fight and win the nation’s wars.

“Medical readiness is tremendously important. We strive every day to ensure we are trained and ready to perform our combat tasks. But, if we’re not medically ready and taking care of our Soldiers and their medical needs then our efforts will fall short. We have to be both medically and combat ready,” said Col. Derek Thomson, commander 1st Brigade Combat Team, 101st Airborne Division (Air Assualt).

Under West’s leadership Army Medicine has worked to reduce the rate of non-deployable Soldiers in the Army in part by drilling down into the Medical Protection System used to track immunization, medical readiness, and deployability data for all Soldiers. 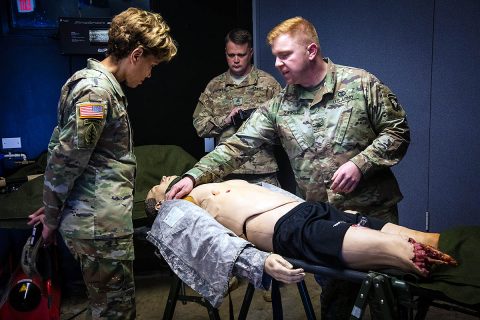 The system outlines the medical and dental readiness requirements each individual Soldier needs and allows medical personnel to take action. West said the Army’s rate of Soldiers who are medically ready to deploy are at historic highs in all three Army components; Active Component, National Guard and Reserve.

“My message to the commanders, our Soldiers who depend on us, our families and the community, is that readiness is number one,” said West, echoing a top priority of Chief of Staff of the Army, Gen. Mark. A. Milley.

“And what that means for Army Medicine is that we need to be at the top of our game — the providers and all the team members who make up Army Medicine — to ensure we’re providing the absolute best care to prepare our Soldiers and their families and community and to make sure that they are healthy, and also if they get injured or sick, that we have the absolute best care to nurse them back to health or to repair any injuries that they have,” stated West.

Next, West set out on the installation to see the different medical assets on post and how they support the Army’s readiness and modernization efforts.

At the 531st Hospital Center, West received a force design update as the Army transitions its Combat Support Hospital platform to a more modular 32-bed field hospital. The field hospital can be expanded incrementally to a 148-bed design, encompassing four medical detachments. It contains a suite of medical and dental services to choose from based on the mission. 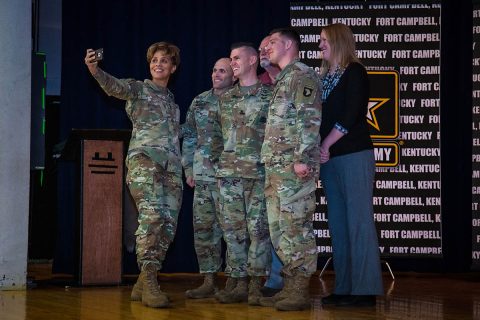 West also visited the Alfred V. Rascon School of Combat Medicine, the Army’s first medical simulation training center, to see how they are training and preparing medical personnel to serve in conditions they may experience when deployed. As the leader of Army Medicine, West said she is focused on ensuring her Soldiers are receiving the training and capability they need to fulfill their mission.

Rascon instructors have a vast spectrum of training environments in which to test their students, including mock villages and combat trauma lanes, that give Soldiers any number of field conditions where they must administer combat causality care. West said she was impressed by the non-commissioned officer instructors and with the realism of the training, which includes state-of-art patient simulators that require Soldiers to really practice their skills.

“In my day, it was hard plastic mannequins that didn’t move but now you have ones that will blink and bleed. When Soldiers apply a tourniquet, they have to really apply enough pressure to stop the bleeding. You have to put 50 pounds of pressure to stop bleeding. That’s not just putting your hands down [over a wound], you have to really apply that pressure. So Soldiers are really getting to practice what they have to do to save a life and that’s important,” said West.

West shared her thoughts and answered questions on a range of topics for Soldiers and beneficiaries. More than 12,000 individuals viewed portions of the Facebook Live town hall that reached more than 30,000 within 24-hours.

“She talked to us about where the Army is going, as well as MEDCOM (U.S. Army Medical Command) in general. It was a great town hall and she answered a lot of our questions as clearly and as detailed as possible,” said Capt. Ijagha Eme, a doctor assigned Blanchfield.

“You’d be surprised to see how much surprise there is about what we do in our military. We have 120 occupational specialties in medical alone. There is not a full understanding of the spectrum of what we do,” said West, adding that she is a huge supporter of Army recruiters and the work they do. “Shout out to our recruiters. It’s a hard life. I really appreciate what they do for Army Medicine and our Army.”

West was stationed at Blanchfield Army Community Hospital at Fort Campbell in the 1990s and served as a staff family physician and then the officer in charge of the Aviation Medicine Clinic. While there she also participated in a medical mission with the 5th Special Forces Group (Airborne).