Clarksville, TN – The Austin Peay State University (APSU) men’s basketball team begins a road journey that spans the remainder of November when the Govs travel to Starkville, Mississippi for a date with nationally-ranked Mississippi State, Friday, November 9th at Humphrey Coliseum. Tip off is at 6:30pm CT. 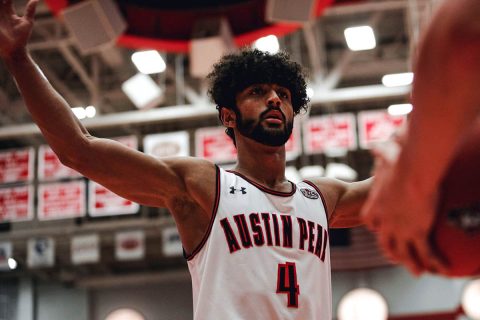 Austin Peay throttled Oakland City, 114-53 in the regular-season opener, with the 61-point margin of victory the largest by the Govs since 2010 (112-52 against Fontbonne, December 11th); however, the 18th-ranked Bulldogs are cut from a different cloth than Oakland City and represent a formidable early-season test for the Govs.

Not only does Austin Peay head coach Matt Figger [1] have familiarity with Mississippi State from his days in the SEC as an assistant at South Carolina, he actually led the Gamecocks to a 74-62 victory against the Bulldogs as acting head coach on the final day of the 2013-14 regular season.

A consensus top-25 team and a darkhorse SEC championship pick among pundits, Ben Howland has built a deep squad returning its top six scorers from a year ago, when the Bulldogs made an NIT Final Four appearance.

Quinndary Weatherspoon and Aric Holman were preseason All-OVC choices and were bolstered in the offseason by a consensus top-25 recruiting class, including McDonald’s All-American Reggie Perry, the top prospect out of the state of Georgia a year ago.

Last Time Out Against Mississippi State

Austin Peay visited Mississippi State to open the 1992-93 campaign and nearly escaped Humphrey Coliseum with an upset victory against the Bulldogs. Greg Franklin scored 20 points, Rick Yudt chipped in with 17 and eight rebounds but what might’ve been we can only guess–future superstar Bubba Wells, sidelined by injury and on his way to a redshirt season, could only watch as the Govs fell just short in an 80-73 loss.

Senior Chris Porter-Bunton [3], the longest-tenured player on the squad, has an outside chance at reaching the 1,000-point barrier in his final campaign. At 619 points entering the Mississippi State game, he would need to average 12.7 points over the 30-game regular-season to reach the milestone.

Check back at LetsGoPeay.com and on Austin Peay’s Official Athletics Facebook page often for up-to-date news about all Governor athletics, as well as the Governor men’s basketball Twitter page (@AustinPeayMBB). Live stats will be available during the game at PeayStats.com, and all home games and Ohio Valley Conference games can be viewed on the ESPN+ app. Postgame video interviews and other videos from around APSU Athletics can be found on our YouTube page (www.youtube.com/letsgopeay). [4]