Greenwood, IN – For the first time in Austin Peay State University volleyball program history, a pair of its student-athletes have been named to the Google Cloud Academic All-District® Teams. Seniors Kristen Stucker [1] and Cecily Gable [2] were among seven student-athletes recognized in District 3 which includes Division I programs in North Carolina, Tennessee and Virginia. 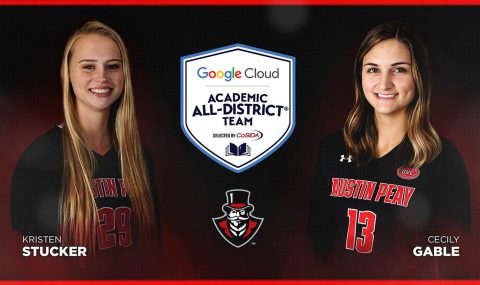 Carrying an unblemished 4.0 grade-point average, Stucker is a double-major in biology and agriculture and a double-minor in chemistry and Pre-Professional Health as part of Austin Peay’s Pre-Veterinary program. Wednesday night, Stucker was named the Ohio Valley Conference’s Setter of the Year for a third-consecutive year and earned her third-straight First-Team All-OVC honor – the first to earn three First-Team All-OVC honors since Nikki Doyle (2012).

Memphis native Gable entered her senior year with a 3.80 grade-point average while working toward her bachelor’s degree in nursing. On the court, she is enjoying the finest season of her career and was named First-Team All-OVC, Wednesday, for the first time in her career.