Knoxville, TN – Coming off a marquee win over No. 11 Kentucky last Saturday, Tennessee will look to win its third straight and become bowl eligible this Saturday as Missouri visits Neyland Stadium.

Kickoff for UT’s final home game of 2018 is set for 2:30pm CT on CBS. Brad Nessler (play-by-play) and Gary Danielson (analyst) will have the call with Jamie Erdahl reporting from the sidelines. Vol Network radio affiliates will have a live audio broadcast with Bob Kesling [1], Tim Priest and Brent Hubbs. Sirius (Channel 94) and XM satellite radio (Channel 192) will also carry the game.

Saturday will also be Senior Day for the Vols as they will honor their 13 seniors prior to kickoff. 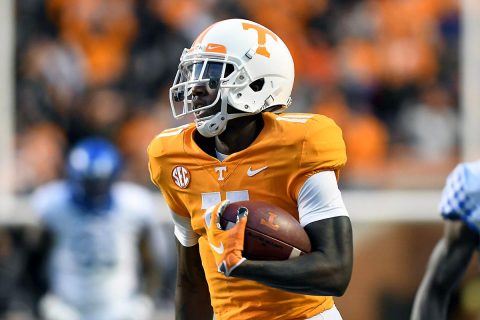 Tennessee outside linebacker Darrell Taylor [2] had four sacks against No. 11 Kentucky last Saturday, recording just the third four-sack game in Tennessee football history. Taylor joined Reggie White (1983 vs. Citadel) and Corey Miller (2013 at Kentucky) as the only Vols with four sacks in a game.

The redshirt junior’s four sacks are tied for the most by a player in a game in the FBS this season. Taylor also joined Derek Barnett (2014) and Leonard Little (1996) as the only players in Tennessee history with multiple games of at least three sacks in the same season.

Tennessee’s defense has shown significant improvement this season under first-year head coach Jeremy Pruitt [3]. The Vols are on pace to better their defensive statistics in nearly every major category this season. The Big Orange have held three opponents without a touchdown this year (ETSU, UTEP, Charlotte), marking the first time since 2008 that the Vols have accomplished that feat.

The Tennessee Vols have also scored three defensive touchdowns this season, which is tied for 10th in the nation. UT held No. 11 Kentucky to just seven points – it’s fewest this season – and 77 rushing yards in last week’s upset win. Pruitt was named the Dodd Trophy National Coach of the Week on Tuesday.

UT’s 24-7 upset victory over No. 11 Kentucky last Saturday marked the program’s second win over a ranked opponent this season. The Vols are one of just eight teams in college football this year that have won two or more games against ranked opponents while being unranked.

Tennessee starting quarterback Jarrett Guarantano [5] has been one of the team’s most consistent performers this season, and his accuracy throwing the football has played a major part in his success. Guarantano ranks fourth among SEC starting quarterbacks in passing efficiency (149.2) and fourth in the conference in completion percentage (65.1%).

The New Jersey native has also been extremely proficient at protecting the football, having thrown 146 consecutive passes without an interception, which is a program record. Guarantano has set career highs this season in completions (140), passing yards (1,768) and passing touchdowns (11), while throwing just two interceptions.

The Vols and Tigers are set to meet for just the seventh time when they square off on Saturday afternoon. Missouri holds a 4-2 lead in the series after winning the first three contests as well as last year’s meeting. UT and Mizzou had never played before the Tigers joined the SEC in 2012.

Despite playing each other only six times, there have been some memorable games in the series. The very first game played between the two programs went to four overtimes with Missouri coming away with a 51-48 victory in Knoxville back in 2012.

The last time the two teams played in Neyland Stadium, in 2016, they combined for 100 points and 1,349 yards of total offense as the Vols came out on top, 63-37, behind 413 total yards and five touchdowns from quarterback Joshua Dobbs.

Missouri enters Saturday’s contest on a two-game winning streak after victories over Florida and Vanderbilt and has won seven consecutive games in the month of November dating back to the 2016 season. The Tigers, led by third-year head coach Barry Odom, are 6-4 overall and 2-4 in SEC play this year.

Mizzou is led by a balanced and potent offensive attack that is averaging 35.5 points per game. Led by senior quarterback Drew Lock and the dynamic duo of Damarea Crockett and Larry Rountree III at running back, the Tigers can beat you through the air or on the ground.  Missouri ranks third in the SEC and 17th nationally in total offense (473.4 ypg), third in the league and 25th nationally in passing offense (277.5 ypg) and fourth in the conference and 44th nationally in rushing offense (195.9 ypg).

Defensively, the Tigers are paced by the linebacker duo of Cale Garrett and Terez Hall. Garrett leads the team with 64 tackles to go along with 3.5 tackles for loss and a sack, while Hall ranks first on the team with four sacks and also has 7.5 tackles for loss to his credit.  Redshirt sophomore Christian Holmes is the leader in the secondary with a team-best nine pass breakups and two interceptions.