All these things can influence performance and have adverse effects. 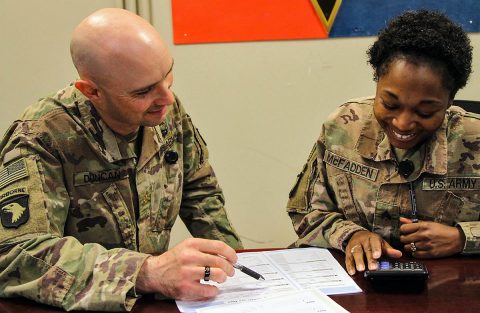 Since arriving in Afghanistan, leaders assigned to 101st Resolute Support Sustainment Brigade have relied on their innovation, implementing programs and training plans that help Soldiers stay resilient and prepared during their time abroad.

One leader that has had a tremendous impact on Soldiers and D.A Civilians across Bagram Airfield is Maj. Jeremy Duncan.

Duncan, a signal officer, and North Carolina native, is the instructor of a financial management course tailored specifically to military personnel. Throughout the 9-week course, Duncan teaches service members how to prioritize their income and strategically build a budget that will eventually liberate them from the burden of debt.

This financial management series is an all-encompassing personal course that teaches financial principles and behavior, it gives precise direction for how people should manage their money. The course educates, and holds participants accountable so they relinquish poor monetary habits.

Duncan’s passion for finance developed after navigating through some grueling life experiences.

“I learned a lot of financial lessons the hard way. I applied for my first credit card because with every application you received a free T-shirt,” said Duncan. “I eventually had credit card bills and medical expenses that my mother could not afford to pay. I hit rock bottom when I found myself homeless for four months, living in a broke down car trying to figure out where my next meal would come from.”

Several years later Duncan was able become what most would consider financially stable. After starting his own business and racking up 50,000 dollars in credit card debt, in conjunction with purchasing two brand new cars, Duncan and his wife, Shanice, found themselves in over $150,000 dollars in debt.

Duncan was introduced to financial management techniques and, within weeks, his paradigm about finances completely shifted. Since learning how to be fiscally responsible 20 months later, Duncan and his wife have paid off $125,000 of the $150,000 accrued debt. After seeing the progress, Duncan wanted to share his story and help Soldiers rid themselves of substantial amounts of debt.

Since arriving to Bagram Airfield, this is the second iteration of Duncan’s financial management course. Duncan has taken on both roles as the primary and assistant instructor with his counterpart Lt. Col. Tyler Oliver, the deputy of civil military operations for the 101st Airborne Division (Air Assault).

Together this two-man team has been able to guide more than 70 Soldiers and 32 D.A. Civilians in the direction of financial liberation. Weekly, participants learn about different topics: emergency funds, the debt snowball concept, budgeting, alleviating excess expenses, real estate purchases, insurances, and even saving for their children’s college.

Attendees continuously express their gratitude and appreciation to the instructors for teaching this course at Bagram, Airfield. Master Sgt. Amy Prince, an automated logistics specialist, and Statesborough Georgia native, expressed how much the course has helped her and her family take strides toward being debt free. Since completing the course, Prince has been able to pay off 36,000 dollars in credit card debt.

“A huge burden has been lifted off my shoulders; I no longer have to pay several companies. This course has given me hope and the necessary knowledge to stay debt free and save for my children’s college fund,” said Prince.

Both Duncan and Oliver believe that it is important for Soldiers to have a strong foundation of finances while serving in the military.

“As a 12-year veteran currently serving in the U.S. Army, I have witnessed several Soldiers and their families struggle financially,” said Duncan. “This stuff is not taught in most schools so when young adults and their families try to make it on their own, unfortunately, most struggle.”

Oliver believes Soldiers who practice sound financial management develop good habits that help with peace of mind and confidence for their future. Oliver stated that this course has the power to take a lot of stress away and provide tremendous value to the units that implement the program in terms of readiness.

According to a Blue Star Families 2017 Military Lifestyle Survey, 62 percent of military families experience stress due to their financial situation.

“Families that are financially prepared with a written plan and talk about their money are in a much better place than those that don’t have these things,” said Oliver. “Financial problems are a leading cause of divorce and the added stress of money problems can be a lot of added stress when a Soldier is away from home.”

Prior to returning home Duncan and Oliver plan to conduct another financial management course. Their goal is to help as many service members as possible before reintegrating back with families.

“The most important thing about this course is it give people hope again,” said Duncan. “They are given the step-by-baby step plan to get out of their financial hole and if they are disciplined enough to follow it, they can finally live the life they never even knew they could.”