Greenbelt, MD – NASA says that a little over 4 billion years ago, the planets in our solar system coexisted with vast numbers of small rocky or icy objects orbiting the Sun. These were the last remnants of the planetesimals – the primitive building blocks that formed the planets.

Most of these leftover objects were then lost, as shifts in the orbits of the giant planets scattered them to the distant outer reaches of the solar system or beyond. But some were captured in two less-distant regions, near points where the gravitational influence of Jupiter and the Sun balance, and have remained trapped there, mostly untouched, for billions of years. 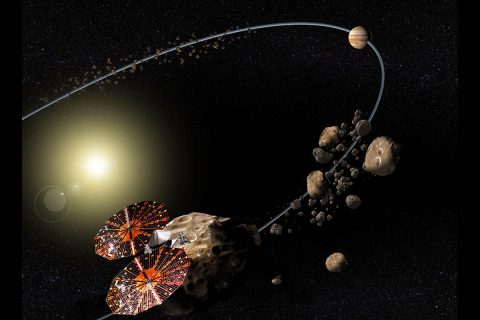 Conceptual image of the NASA Lucy mission to the Jupiter Trojan asteroids. (NASA/SwRI)

Not quite 4 million years ago, an ancient ancestor of modern humans roamed the land in what later would become the country of Ethiopia. Thirty-four years ago, Donald Johanson discovered the fossilized skeleton of this creature, later named Lucy, after the Beatles’ 1967 hit “Lucy in the Sky with Diamonds.”

Three years from now, a spacecraft named Lucy, inspired by the famous fossil [1], will begin its exploration that could help determine the early history of the Solar System.

NASA’s Lucy mission will fly by six of those trapped planetesimals – the Jupiter Trojan asteroids – giving humanity its first glimpse of these ancient objects. By studying these fossils of planet formation, the Lucy mission could reveal as much about the development of the solar system as the Lucy fossil did about human evolution. And on the way to the Trojans, Lucy will visit an asteroid that the team has named Donaldjohanson, after the anthropologist that discovered the fossilized skeleton of our ancestor.

“The Trojans hold vital clues to the origin of the Solar System because they are leftover remnants from, and so were witnesses to, the process that built the planets,” said Principal Investigator Harold Levison of the Southwest Research Institute in Boulder, Colorado. 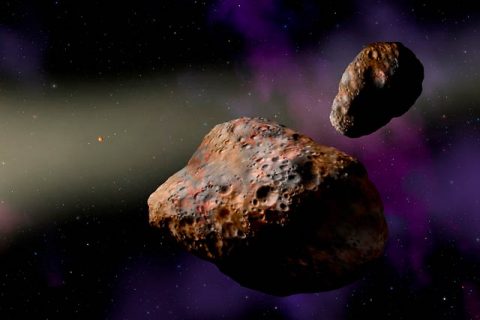 SwRI scientist studied the binary asteroid Patroclus-Menoetius, shown in this artist’s conception, to determine that a shake-up of the giant planets likely happened early in the solar system’s history, within the first 100 million years.(Image Courtesy of W.M. Keck Observatory/Lynette Cook)

The Trojans orbit the Sun in synchrony with Jupiter, following almost the same path, but leading the giant planet by about one-sixth of the way around the orbit, or trailing by the same amount. This keeps them near one of two gravitationally stable “Lagrange” points, L4 and L5, positioned at the apex of an equilateral triangle with Jupiter and the Sun, where they are protected from being perturbed onto different orbits or out of the solar system entirely.

The areas around Jupiter’s L4 and L5 points each contain a swarm of objects billions of years old that hold information about the history of our solar system.

Earth-based observations have enabled astronomers to classify the Trojan asteroids by subtle variations in color and likely composition. “We see variation in the properties we can measure from the Earth and we would like to know the physical basis behind this variation,” Lucy Project Scientist Keith Noll said.

“A mission to a single object would not have allowed that kind of comparison – by sampling a diverse set of objects, Lucy will provide a better basis for understanding what we are seeing in the broader population,” stated Noll.

By visiting six Trojans spanning all of the major types, two of which make up a binary system (two objects that orbit each other), Lucy will gain a wealth of information about the objects that made up the solar system’s original planetesimal disk. Noll works at NASA’s Goddard Space Flight Center in Greenbelt, Maryland which is a key partner in the Lucy mission.

One characteristic the Trojans have in common is that they are dark. “They only reflect four or five percent of the light that hits them,” said Noll. “That’s really dark. Black pavement on the road is far more reflective.”

What darkens the Trojans is a mystery that could have surprising implications for our Earth. “Dark objects may have organic (carbon-containing) compounds on their surfaces,” said Senior Scientist Amy Simon. “If many of the Trojans we survey show evidence of organics, it will imply that the building blocks for life were common throughout the early solar system.” Simon works at NASA Goddard where she serves as a deputy principal investigator for one of the Lucy spacecraft’s instruments. 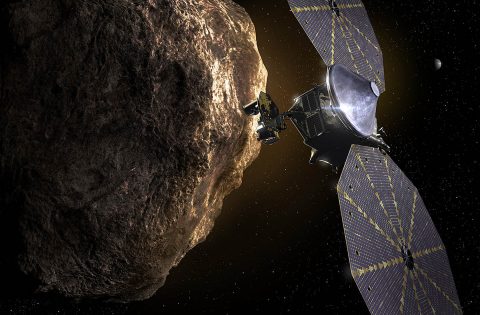 An artist’s concept of the Lucy Mission. (SwRI)

Some of the same processes that trapped the Trojans in their present orbits sent other leftover planetesimals farther from the Sun, and we now find them in the Kuiper Belt, the icy region beyond Neptune that is home to Pluto and other dwarf planets. (NASA’s New Horizons spacecraft explored Pluto following a 9-year journey, and will fly past another Kuiper Belt Object on New Year’s Day 2019.)

Data collection will be vital to Lucy’s success. The mission will carry four instruments in its payload: L’Ralph, consisting of MVIC (Multi-spectral Visible Imaging Camera), a multi-color imager, and LEISA (Linear Etalon Imaging Spectral Array), a spectrograph that will provide information on surface composition; L’LORRI (Long Range Reconnaissance Imager), a high-resolution camera; and L’TES (Thermal Emission Spectrometer), which will measure the surface temperatures of the Trojans.

And in addition to the scientific instruments, Lucy’s communications (radio) and target acquisition system (TTCam) will contribute to the science mission. L’Ralph will analyze the Trojans’ surfaces to look for the presence of different silicates, ices and organics on these asteroids. L’LORRI will take high-definition pictures of the Trojans supplemented by TTCam at closest approach. L’TES will investigate the physical state of the Trojans’ surfaces, and the radio data will be used jointly with the imaging data to determine their masses and densities.

Lucy is scheduled to launch in October 2021, flying by more targets in different orbits around the Sun than any other mission in history. Answers to key questions about the solar system’s distant past will be now within reach, thanks to the Lucy mission.

The Lucy mission is led by Dr. Harold Levison and his team at the Southwest Research Institute and is managed by NASA’s Goddard Space Flight Center. The instruments on Lucy are developed by Goddard, Arizona State University, and the Johns Hopkins University Applied Physics Laboratory.

The spacecraft will be developed and constructed by Lockheed Martin. Following its construction, Lucy will undergo further testing, and in three years be launched on a mission that will forever change our knowledge of the solar system.

For more information about the Lucy mission, visit: www.nasa.gov/lucy [4]

[1] inspired by the famous fossil: https://www.nasa.gov/feature/goddard/2017/inspiration-links-the-beatles-a-fossil-and-a-nasa-mission