Clarksville, TN – Clarksville Mayor Kim McMillan directs that the United States, State and City flags be flown at half-staff at all City of Clarksville offices and facilities until sunset Sunday, December 30th, 2018.

This is in keeping with the Presidential proclamation issued Saturday afternoon to fly the United States Flag at half-staff in honor and tribute to the memory of President George H.W. Bush, who died Friday. 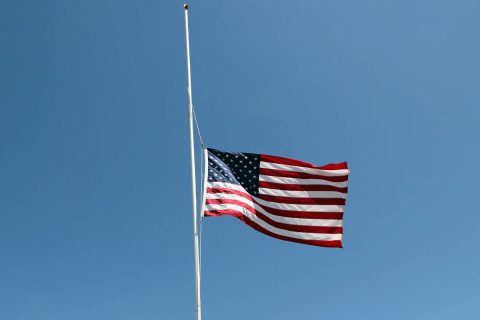 American Flag at Half Staff

Here is the Presidential proclamation:

By The President Of The United States: A Proclamation

NOW, THEREFORE, I, DONALD J. TRUMP, President of the United States of America, by the authority vested in me by the Constitution and the laws of the United States, in honor and tribute to the memory of President George H.W. Bush, and as an expression of public sorrow, do hereby direct that the flag of the United States be displayed at half-staff at the White House and on all public buildings and grounds, at all military posts and naval stations, and on all naval vessels of the Federal Government in the District of Columbia and throughout the United States and its Territories and possessions for a period of 30 days from the day of his death. I also direct that, for the same length of time, the representatives of the United States in foreign countries shall make similar arrangements for the display of the flag at half staff over their embassies, legations, consular offices, and other facilities abroad, including all military facilities and naval vessels and stations.

I hereby order that suitable honors be rendered by units of the Armed Forces under orders of the Secretary of Defense.

I do further appoint December 5, 2018, as a National Day of Mourning throughout the United States. I call on the American people to assemble on that day in their respective places of worship, there to pay homage to the memory of President George H.W. Bush. I invite the people of the world who share our grief to join us in this solemn observance.