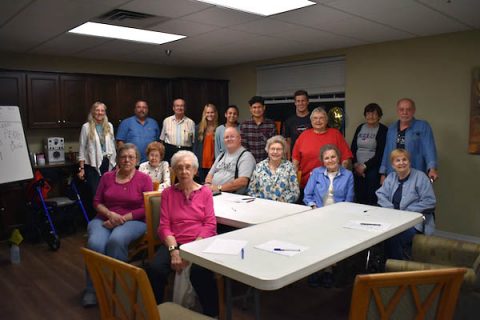 APSU and MCHS students come together to teach Spanish 101 to senior citizens.

“The residents wanted to learn Spanish, so I reached out to (APSU),” she said. “And they’re really learning a lot.”

To make the language classes a reality, Lancaster contacted Josh Rees, an APSU student and president of the University’s Sigma Delta Pi Spanish Honor Society. That day, Rees happened to be visiting Montgomery Central High School (MCHS), which gave him an idea for a collaborative project.

Throughout the fall semester, a group of APSU and MCHS students have visited Fieldstone Place every Thursday evening, where they teach residents the basics of the Spanish language. The classes usually start with a simple principle, and then the residents break into smaller groups to practice speaking.

“It surprised me their excitement to learn,” Rees said. “They keep asking us to teach them harder stuff, and a lot of them have gone out and purchased dictionaries and notebooks to take notes in.”

The initial program will end this December, when APSU classes end for winter break, but Rees said the club plans to continue offering the Spanish classes at Fieldstone Place next spring.

“We’re going to do it up until May, and then re-evaluate after that,” he said.