Knoxville, TN – The sophomore duo of Rennia Davis [1] and Evina Westbrook [2] combined for 44 points to lead No. 9/9 Tennessee to a 65-55 victory over Stetson at Thompson-Boling Arena on Wednesday night.

Davis (24 points and nine rebounds) and Westbrook (20 points) combined to hit 20 of 21 free throws in the win, as the Lady Vols finished 25 of 30 for the game from the charity stripe for 83.3 percent. Freshman Zaay Green [3] tallied eight points and five rebounds, while Mimi Collins [4] was strong on the glass with seven points and seven rebounds. 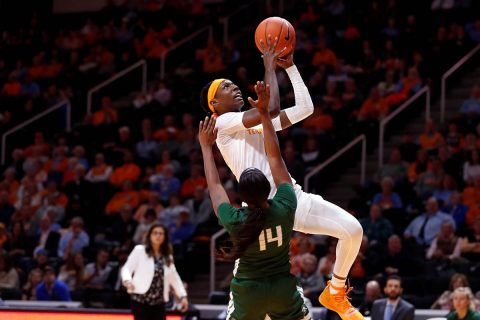 Tennessee Women’s Basketball falls behind early, but comes back for 65-55 win over Stetson at Thompson-Boling Area. (UT Athletics)

After being held to just 22 points at the half, Tennessee (7-0) rallied with a 22-0 run in the third quarter to outscore the Hatters 43-17 in the second half. Westbrook and Davis led the charge for the Lady Vols with 30 combined points in the final two quarters.

Stetson (1-7) was led by redshirt-senior forward Sarah Sagerer, who logged 19 points and six rebounds. Addi Walters was the only other Hatter with double-digit points (17), as she displayed 3-of-5 accuracy from deep range.

Tennessee got down early, as Stetson rode a 16-8 run on 5-of-6 shooting from the field to start the game. The Hatters hit three shots from beyond-the-arc and tallied eight points off turnovers in the first quarter.

Stetson’s 62 percent shooting from the field granted them a 23-15 lead through 10 minutes of play. Five Lady Vols players logged points in the quarter but shot just one of six from three-point range. Meanwhile, 20 of the Hatters first-quarter points came from two players, Walters and Sagerer.

Not much changed for Tennessee to begin the second quarter, as it missed its first three shots and Stetson shot out on a 9-0 run. The first points of the quarter for the Lady Vols came on a pair of free throws from Davis after five minutes of play. The Hatters took a 38-22 lead to halftime, as Tennessee registered 13 first half turnovers. Davis and Westbrook led the Lady Vols with 14 combined points at the halfway point.

Behind Westbrook’s seven points early on, Tennessee hit its stride to start the second half and cut the Stetson lead to single digits after the Hatters had initially pushed their lead to 20, 42-22, with 7:29 to go in the third. The Lady Vols forced four Hatters turnovers and a four-minute scoring drought to cut the lead to 42-37 halfway through the period.

A three-pointer from Davis at the 2:43 mark gave Tennessee the lead and its longest run of the year (22-0). The Lady Vols outscored Stetson 22-6 in the stanza, going into the fourth quarter tied up at 44 points apiece.

The Lady Vols jumped out to a six-point run and held the Hatters to a near three-minute scoring drought to start the fourth quarter. Westbrook and Davis took over, meshing for 10 of Tennessee’s first 14 points.

Another near three-minute scoring drought for Stetson gave the Lady Vols a 60-53 lead with one minute remaining in the game. Tennessee iced the contest with a pair of free throws from Westbrook to claim a 10-point win.

Evina Westbrook [2] totaled 20 points against Stetson for back-to-back 20+ performances, moving her total to three on the season. Rennia Davis [1] also surpassed the 20-point mark against Stetson with a season-high 24 points to give Tennessee four 20+ point efforts this season. Westbrook previously had 29 on Sunday vs. Oklahoma State and tossed in 20 in the opener vs. Presbyterian.

Tennessee overcame a 20-point deficit against Stetson, the largest comeback a team has made under Head Coach Holly Warlick [6] and the second-largest comeback in program history. It is the fourth game this season in which Tennessee has trailed in the second half and come back to win.

Tennessee recorded its longest run of the season against Stetson with a 22-0 spree in the third quarter. It was the eighth time this season the Lady Vols put together a run of 10 or more points. UT has not allowed any double-digit runs.

The Lady Vols held Stetson to six third-quarter points, tying for the sixth fewest points scored by an opponent in any quarter.

Tennessee went a perfect 13 of 13 from the charity stripe in the third quarter against Stetson and was 25 of 30 on the game for a free-throw percentage of 83.3%. That is the team’s highest free-throw percentage since going 20-24 (83.3%) against Auburn in the SEC Tournament on March 1st, 2018.

Up Next for Tennessee Lady Vols

Tennessee travels to Austin to face Texas on Sunday. The game is slated for 12:00pm CT and will air on ESPN 2.