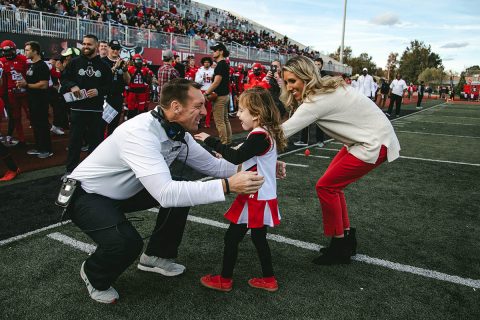 The Rare Disease Champion Award is presented annually by Uplifting Athletes, a nonprofit organization founded in 2007 that ‘”inspires the rare disease community with hope through the power of sport.”

The award is presented to “a leader in the world of college football who has realized his or her potential to make a positive and lasting impact on the rare disease community.”

Eargle won the award based on an online public vote that lasted from November 12th-December 4th.

“We are proud to honor Coach Joshua Eargle [1] as the 11th Rare Disease Champion. The Eargle family’s story while unique, is shared with many other rare disease families across the country,” Uplifting Athletes Executive Director Rob Long said.

“The willingness of Coach Eargle and his family to use their platform to inspire other rare families will undoubtedly have a profound impact and bring awareness to the rare disease cause,” stated Long.

Eargle and his wife Kristen have three children, and their middle child, Landrey, was diagnosed with a rare mutation of the CSNK2B gene. She battles myoclonic epilepsy, intellectual disability, a congenital heart defect, and immunodeficiency.

Prior to kickoff of the 2018 football season at Georgia, a GoFundMe campaign to help raise money for Landrey’s medical costs gained significant attention from college football fans across the country who were eager to support the cause, including a huge contingent of Bulldogs fans.

Eargle, and his family, will continue to use his platform as a means to raise awareness for conditions similar to Landrey’s with the aim to help generate funding for battling and eventually finding a cure for rare genetic disorders.