Vancouver, BC – The Nashville Predators dug too big of a hole in Vancouver tonight, and couldn’t climb back out, losing to the Vancouver Canucks, 5-3.

Nashville is on a two game Canadian road trip and will travel to Calgary for a Saturday night matchup against the Flames.  Vancouver will return to Nashville next week.

Alexander Edler started the scoring for Vancouver at 7:48 of the first period with a slap shot that beat Pekka Rinne for the early 1-0 lead.  Edler was assisted by Nikolay Goldobin and Elias Pettersson on the score. 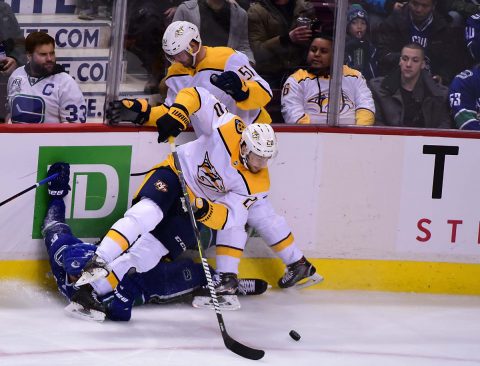 Bo Horvat gave Vancouver the 2-0 lead at 19:33 of the opening frame with a wrist shot in the goal crease just as the period was ending, and the Canucks took the lead and the momentum into the first intermission.

Nashville opened the second period with a bit more pressure on Vancouver when Ryan Hartman lit the lamp for the Predators at 7:21 of the period with a deflected goal and that cut the lead to 2-1.

Vancouver would answer at 8:57 of the second period when Jake Virtanen fired a snapshot into the back of the net and the Canucks had their two goal lead back, 3-1.

Then at 18:49 of the second period, Elias Pettersson would give the Canucks a 4-1 lead when he was awarded a penalty shot after he was fouled on a breakaway by Mattias Ekholm.  Pettersson beat Rinne with a nifty backhanded wrist shot for the score.

At the start of the third period, Pekka Rinne was pulled from the net and replaced by backup Juuse Saros.

Vancouver would welcome Saros at 1:21 of the final frame when Loui Eriksson scored an unassisted goal for the 5-1 lead.

The Predators would not go away though, as they picked up the offensive pressure against the Canucks.  Colton Sissons would nail a snapshot at 5:17 of the period and Nashville would draw to within 3, for the 5-2 tally.

Then at 18:37 of the period, Matt Irwin would score on a deflection and the Predators were within reach at 5-3.

That would be all she wrote though for Nashville as they just ran out of time and that would be your final score from Canada, 5-3.

Nashville travels to Calgary for a Saturday night matchup against the Flames before returning home to face Ottawa on Tuesday night at the Bridgestone arena.