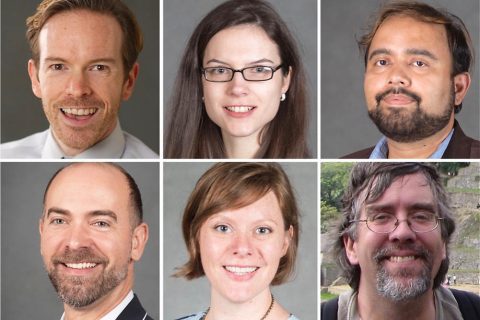 “I do feel like that in the College of Arts and Letters, a lot of research is done,” he said. “One of my goals as interim dean is to celebrate that research.”

“One way to celebrate it is to support it.”

Students and professors applied throughout the fall semester for the up to $2,000 grants. With the money, they’ll travel to far-off places such as India and Romania and to closer destinations such as Missouri and Vermont.

“I really got a sense of what was going on in the college and was very impressed about some of the things that are happening,” Jones said.

The students were especially excited to hear their projects were picked.

“That was the best part,” Jones said. “It’s a big deal for a college to say what you’re working on is important and we’re going to give you money to help you out.”

Rei Miller was surprised her project – a multimedia interactive about how stereotyping and writing, specifically in emails, affect the writer and the reader – was awarded.

“I was honestly expecting to receive a decline, so when I saw the ‘congratulations,’ my brain just stopped,” she said. “I was in a sort of shock and speechlessness, which then led me to saying expletives and not being able to fall asleep.”

Jane Seage is going to Romania next summer to work at an archaeological site, a Roman villa and settlement where she’ll learn about archaeological and geophysical techniques, the culture and history of the area and the Roman impact.

“Getting the grant was a huge relief since the deadline for the trip’s fees was coming up, and this is my only way to really pay for it,” she said.

Christopher Bailey
APSU Department of Theatre and Dance, will attend the 38th annual Three-Day Intensive at the Commercial Theatre Institute in New York City for a comprehensive education in commercial theater producing.

Soma Banerjee
APSUDepartment of History and Philosophy, will conduct research in the specialized archives in Kolkata, India, to complete the field research for his upcoming book, “The Making of Modern Physics in Colonial India.”

Korre Foster
APSU Department of Music, will attend “Choral Art: Conductors and Composers” residency at the Banff Centre for the Arts and Creativity in Banff, Canada, to explore new methods of performance and composition of choral music.

Gregory Hammond
APSU Department of History and Philosophy, will spend six weeks conducting archival research in Peru in support of a book tentatively titled “Women’s Suffrage in Peru: Voting Rights as a Measure for Human Rights.”

Kristen Sienkiewicz
APSU Department of Music, will perform and present a lecture at the 2019 International Horn Symposium in Ghent, Belgium.

Jane Wessel
APSU Department of Languages and Literature, will conduct research at the Garrick Club and the Victoria and Albert Museum in London, England, for an article on extra-illustration and the construction of celebrity in 18th-century England.

Jordan Bennett
APSU Department of Music, will attend the 2019 International Horn Symposium in Ghent, Belgium, where he will attend master classes and compete in the Frizelle Orchestral Audition Contests.

Julia Damore
APSU Department of Music, will attend “German for Singers,” an immersive experience where singers speak only German for seven weeks, at Middlebury College in Vermont.

Catelyn Dasilva
APSU Department of Art + Design, will create a series of art pieces titled “State of Awareness” in which she explores the viewers’ preconceived and romantic notions of cities, particularly Los Angeles and New York City.

Erin Dodd
APSU Department of Communication, will attend the Popular Culture Association’s 2019 National Conference to present a paper titled “Words We Use: The Slang of Today’s College Students.”

Jane Seage
APSU Department of Languages and Literature, will travel to Romania to participate in archeological research, attending a workshop on ground-penetrating radar then excavating a Roman villa.

To learn more about the College of Arts and Letters, go to www.apsu.edu/coal [3]