Knoxville, TN – In one of women’s basketball’s classic rivalries, No. 9/9 Tennessee (8-0) and No. 11/11 Stanford (7-1) face off Tuesday, December 18th in the 36th meeting between these storied programs. Tip-off is slated for 5:02pm CT at Thompson-Boling Arena, with the game available on the SEC Network and the Lady Vol Radio Network.

The Lady Vols will have gone eight complete days between games, entering with the momentum of an 88-82 victory over No. 12/12 Texas in Austin on December 9th. Stanford, meanwhile, comes to Knoxville after a 68-63 home win over No. 3/4 Baylor on Saturday. 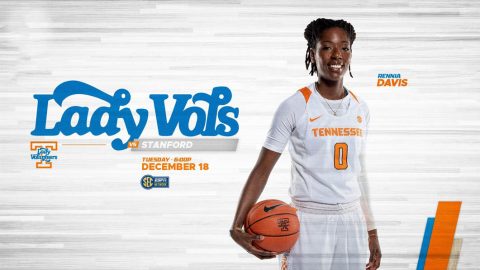 The Cardinal bounced back in strong fashion after falling at Gonzaga, 79-73, on November 25th.

UT has won two straight in the series and three of the past four, giving Holly Warlick a 3-3 record against one of college basketball’s coaching giants.

Tennessee’s Lou Brown (out for season/knee injury) and Stanford’s Alanna Smith both hail from Melbourne, Australia. The duo played against one another while Brown was in the Pac-12 at Washington State before becoming a graduate transfer to UT. The Lady Vols’ Kasiyahna Kushkituah and the Cardinal’s Maya Dodson were high school teammates at St. Francis High School in suburban Atlanta, GA.

Pam Ward (play-by-play) and Carolyn Peck (analyst) will describe the action for the SEC Network.

Tuesday night is designated as an ORANGE OUT game! Wear your best Tennessee Orange!

The UT-Stanford contest will feature a $2.00 Tuesday promotion, with $2.00 Petros OR $2.00 drinks. Fans must get a voucher at participating concession stands inside Thompson-Boling Arena.

There will be $2.00 off any TeamShop purchase at the Arena on game day. No voucher necessary. $5.00 minimum purchase required.

Kids 12 & younger can pick up a wristband at the Fan HQ table on the concourse to participate in the pregame high-five tunnel. Wristbands are limited. To purchase discount group tickets and reserve wristbands for your team, call 865.946.7000.

It’s the Twelve Names of Volidays! This game features the second and third names of Volidays! If your name is Carol or Jack, receive a complimentary ticket to the game at the ticket window with ID.

Help us Spark the Summitt during introductions at the game! Download our free light-up app, courtesy of Coca-Cola. Once downloaded, simply open your Hoops Hype app when the lights go out, and let your phone do the rest.

There will be free parking & shuttle service available from UT’s Ag Campus. Shuttles begin two hours prior to tip-off.

This is the 36th all-time meeting between these programs, and the Lady Vols own a 25-10 record vs. the Cardinal in a series that dates back to December 18th, 1988.

This will mark the 32nd time these teams have played when both schools are ranked in the top 15 of at least one of the polls.

There have been 14 occasions when both programs were ranked in the top five of either the AP or coaches polls and 25 top-10 match-ups, pending the teams’ December 17th and 18th poll positions.

One of those neutral site wins for Tennessee, came in the Lady Vols’ run to NCAA Championship trophy number eight, when the Lady Vols defeated Stanford, 64-48, on April 8, 2008, in Tampa, FL.

The Lady Vols have won two straight in the series and three of the past four meetings.

UT and SU have needed overtime to settle scores in six contests, with the club from Rocky Top holding a 4-2 record. Tennessee is 2-0 in OT games played in Knoxville, 1-2 at Stanford and 1-0 at neutral sites.

UT is 68-20 all-time vs. schools currently in the Pac-12 Conference, forging a 1-1 record in 2017-18 with a road win over Stanford and a home loss to Oregon State in the NCAA Tournament.

Consecutive 20s
Point guard Evina Westbrook has scored 20+ points in three straight games, the most by a Lady Vol since Diamond DeShields put together three in a row in 2016-17. The only other Warlick-era players to drop three 20s in a row were Meighan Simmons twice in 2013-14 and Isabelle Harrison once that season. The last UT player to produce four in a row was Candace Parker during the first four games of 2007-08.

Let It Fly,  M3M3!
Meme Jackson had herself a day at Texas on December 9th, firing in a career-high 33 points and helping key a UT victory. She leads the Lady Vols with 18 three-pointers after knocking down a season-best-tying four vs. the Longhorns.

London Calling
Cheridene “London” Green is gaining confidence with each outing. The redshirt senior had five double-figure scoring efforts all last season and already has four in eight games this year.

Winning Board Battles
UT has out-rebounded all of its foes except a taller Texas team, which held a 41-35 advantage with Lady Vol Kasi Kushkituah out due to injury.

Match-Up On The Glass
As noted, the Lady Vols rank as a strong rebounding team. Stanford is solid as well, ranking No. 10 in rebound margin per game at 12.4.

Texas (7-2) was led in scoring by Audrey Warren with 21 points. Danni Williams, Destiny Littleton and Sug Sutton were also in double digits for the Longhorns with 14, 13 and 11, respectively.

In the 40th meeting between the two teams, the win moved Tennessee’s record to 25-15 all-time against Texas and 4-3 under Holly Warlick. UT has won the last two meetings.

About the Standford Cardinal

Stanford is the No. 6 all-time winningest women’s college basketball program and is directed by one of the game’s all-time greatest coaches in Tara VanDerveer.

Stanford returned 12 letterwinners from a year ago, including three players who were starters the majority of the season (Alanna Smith, Kiana Williams and Marta Sniezek).

Alanna Smith had 21 points and eight rebounds, Shannon Coffee made a key 3-pointer late in the fourth quarter and No. 11 Stanford held on to beat previously undefeated #3/4 Baylor, 68-63, on Saturday afternoon.

Stanford led 58-42 entering the final stanza and had to withstand a 21-10 fourth-quarter blitz by the Bears to earn the victory. BU was eight of 12 from the field for 66.7 percent in the fourth.

The win improved Tennessee to 12-0 on the season and broke a five-game Tennessee losing streak at Maples Pavilion dating back to December 4th, 2005. That season also marked the last time UT opened a campaign with 12 straight wins.

Senior Mercedes Russell contributed a double-double with 11 points and 10 rebounds on the night, while freshman Evina Westbrook posted a (then) career high of 17 points. In addition to a season-high 28 points, Nared also posted a career-best seven steals.

Brittany McPhee was Stanford’s leading scorer and the only Cardinal in double digits, notching 27 points on the night.

Next Up for UT Lady Vols

After the Stanford game, the UT Lady Vols will play host to East Tennessee State on Friday, December 21st at 6:00pm (SECN+) in the final contest before winter break. Following a six-day respite from the action, the Tennessee Lady Vols return to host Murray State and Belmont on December 28th and 30th, respectively, to close out 2018.

The ETSU contest is a “School’s Out” game. All Kids 12 & younger receive complimentary admission at any arena ticket window.

The game vs. ETSU also is a “Big Orange Friday” contest. Download a Buy One/Get One free ticket voucher available exclusively at BigOrangeFriday.com.