Nashville, TN – The Tennessee Titans, Washington Redskins rivalry dates back to 1971, a year after the merger of the American Football League and National Football League. The Redskins defeated the then – Houston Oilers by a final score of 22-13 on October 10th, 1971 in the first of 12 meetings in the regular season.

The series is currently tied 6-6. The Titans have a 3-2 record at home against the Redskins and are 3-4 on the road.

In the most recent Titans-Redskins meeting, played on October 19th, 2014, the Redskins won on a 22-yard field goal by Kai Forbath as time expired in the fourth quarter. 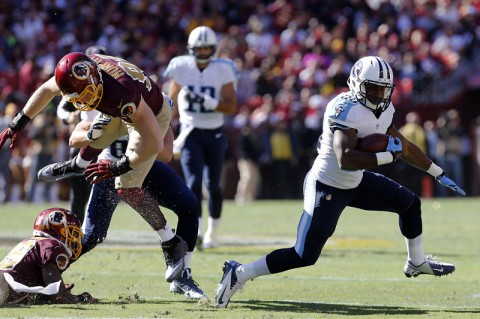 Redskins quarterback Colt McCoy came off the bench for Kirk Cousins to complete 11 of 12 passes for 128 yards and a touchdown, outdueling Titans starter Charlie Whitehurst.

The last time the Redskins visited Nissan Stadium was Week 11 of the 2010 campaign. In that game, Graham Gano booted a 48-yard field goal in overtime to lift the Redskins to a 19-16 win. Although Vince Young began the game at quarterback, his injury in the third quarter forced third-stringer Rusty Smith into the game with Kerry Collins inactive due to a calf injury.

On August 12th, 1995, a historic preseason game was played when the then – Houston Oilers traveled to Knoxville, Tennessee, to play a preseason game with the Redskins. The teams spent the previous two days practicing together at Maryville College outside of Knoxville. The same weekend, then-owner K.S. “Bud” Adams, Jr. entered into an exclusive negotiating period with the city of Nashville to relocate the Oilers to Tennessee. An agreement was finalized by November of the same year.

In 1975, the Oilers earned a 13-10 win over the Redskins, giving them their first franchise win over an NFC team.

Redskins running back Stephen Davis records a rushing and a receiving touchdown. Following the game, the Titans go on to win 11 of their next 12 games before falling in the AFC Championship.

2006 Week 6 • Oct. 15, 2006 • TITANS 25 at Redskins 22
A 30-yard field goal by Rob Bironas lifts the Titans to their first victory of the season and the first win in the career of rookie quarterback Vince Young, who completes 13 of 25 passes for 161 yards, including a three-yard touchdown pass to Brandon Jones. Travis Henry sets a career high with 178 rushing yards on 32 carries. Casey Cramer blocks a Redskins punt for a safety.

Mark Brunell passes for two touchdowns and a game-tying two-point conversion prior to Bironas’ game-winner. After losing their first five games, the win is the Titans’ first of eight victories in their last 11 contests.

2010 Week 11 • Nov. 21, 2010 • REDSKINS 19 at Titans 16 (OT)
Graham Gano’s 48-yard field goal provides the Redskins an overtime win after the Titans are called for 35 yards of penalties on the game-winning drive. The teams combine to attempt nine field goals, including a miss by Gano at the end of regulation.

With Donovan McNabb at quarterback for the Redskins, Rusty Smith finishes the game for the Titans after Vince Young (12-16, 165 yards) is injured and Kerry Collins is already inactive. Smith’s 36-yard touchdown pass to Randy Moss is called back for offensive pass interference. Marc Mariani scores on an 87-yard punt return.

The Titans are called for 11 penalties and commit two turnovers, while the defense forces a pair of turnovers.