Nashville, TN – This week’s game will mark the 49th all-time contest between the Tennessee Titans and Indianapolis Colts. The Colts lead the series 32-16.

In the first meeting of 2018, played on November 18th at Lucas Oil Stadium, Andrew Luck totaled 297 yards and three touchdown passes to lead the Colts to a 38-10 victory. Titans starting quarterback Marcus Mariota left the game in the second quarter due to an elbow injury. 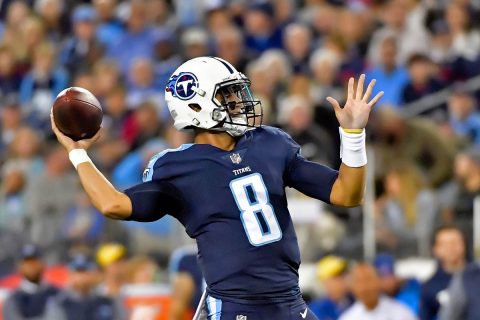 Tennessee Titans quarterback Marcus Mariota (8) throws a pass against the Indianapolis Colts during the first half at Nissan Stadium on October 16th, 2017. (Jim Brown-USA TODAY Sports)

The last time the Titans and Colts met at Nissan Stadium was Monday night, October 16th, 2017, when the Titans snapped the Colts’ 11-game winning streak in the series with a 36-22 victory.

The Titans scored 21 points in the fourth quarter, including a 53-yard touchdown pass from Marcus Mariota to Taywan Taylor that broke a 22-22 tie.

2016 Week 11 • Nov. 20, 2016 • Titans 17 at COLTS 24
The Colts score the game’s first 21 points, but the Titans battle back to score 17 unanswered. Trailing by seven points, the Titans are stopped on fourth-and-one at the Indianapolis 19-yard line inside final three minutes. Marcus Mariota passes for 290 yards and two touchdowns, including a 34-yarder to Tajaé Sharpe.

Henry totals 131 yards on 19 carries, and DeMarco Murray adds 40 rushing yards and a touchdown. The Titans defense limits the Colts and quarterback Jacoby Brissett to 22 percent on third down in the game and 111 total yards in the second half. Colts linebacker John Simon scores on a 26-yard interception return.

2017 Week 12 • Nov. 26, 2017 • TITANS 20 at Colts 16
DeMarco Murray scores the go-ahead touchdown on a one-yard run with 5:59 remaining in the fourth quarter. The Titans erase a 10-point deficit in the second half. The Titans defense sacks Jacoby Brissett eight times, tied for the third-highest single-game sack total in Titans/Oilers history.