Knoxville, TN – After an Admiral Schofield [1] putback layup on the opening possession, No. 3 Tennessee led its pre-conference finale wire-to-wire, defeating Tennessee Tech, 96-53, on Saturday in front of a season-high 21,165 fans.

The Vols (11-1) powered their way past the Golden Eagles, (4-9) dunking the ball a season-high 12 times and blocking a season-high 12 shots en route to the 43-point victory. It marked the fifth time this season that Tennessee defeated an opponent by 20-plus points at Thompson-Boling Arena. 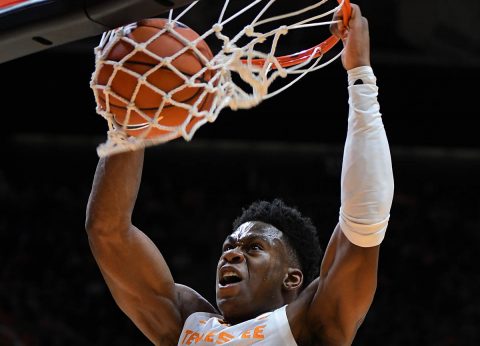 National Player of the Year candidate Grant Williams [2] finished with a game-high 25 points, converting on 10-of-11 attempts from the field. Three other Vols joined Williams in double figures, including point guard Jordan Bone [3], who recorded his second double-double in three games, posting 16 points and a game-high 10 assists.

Tennessee finished the day shooting a season-high 63.8 percent from the field. For most of the game, the Vols were shooting better than 70 percent, including a 74.4 percent mark in the first half.

Kingsport, Tennessee, native John Fulkerson [4] ended the game with a career-high 15 points, with eight coming via dunk. The redshirt sophomore shot 6-of-7 from the field, adding four rebounds, two rebounds and a pair of steals. Williams, Fulkerson and Schofield combined for 56 points in the game, shooting 88.5 percent on 23-of-26 shooting.

Tennessee ended the last 10:32 of regulation on a 23-4 run, as the Vols limited the Golden Eagles to just 20 points in the second half.

The lead stretched out to 20-plus points just three minutes into the second half, where it remained for the rest of the game. Tennessee led by as many as 44 points in the second half.

The Vols lead ballooned to double digits just seven minutes into the game, as the team made nine of its first 12 attempts from the field. In just his first six minutes on the floor, Williams scored in double figures, beating everyone down the floor to give Tennessee a 20-8 edge at the 12:45 mark of the first half.

Tennessee continued to attack the rim in the first half, dunking the ball eight times on the Golden Eagles. Seven of the dunks came during a 6:55 stretch, as Fulkerson’s breakaway slam extended the Tennessee edge to 27 points with 3:05 to play in the first half.

With the help of 18 points from Williams and 12 from Bone, the Vols took a 51-33 lead into the halftime break. Williams converted on 8-of-9 attempts from the field as Tennessee shot 74.2 percent in the half. The Vols’ 51 first-half points were UT’s most in a first half this season.

As a team, Tennessee finished with a season-high 12 blocked shots.

Grant Williams’ [2] 25-point performance against Tennessee Tech marked the 17th time that the Charlotte, North Carolina, native has reached the 20-point threshold in his Tennessee career, including the sixth time this season.

Meet Me AT The Rim

Jordan Bone [3] became the first Tennessee player to record two double-doubles from points and assists in the same season since Tyrone Beaman did so during the 1982-83 campaign.

Bone’s 16-point, 10-assist performance against Tennessee Tech joined his 24-point, 11-assist game against Samford for December 19th. Over the course of the past three games, Bone has dished out 26 assists while committing only four turnovers — a 6.5:1 assist-to-turnover ratio.

Up Next for Tennessee Vols

The Vols tip off Southeastern Conference play at home against Georgia on Saturday at 2:30pm CT. That game will air on SEC Network.

Ticket availability for Tennessee’s remaining home games this season is extremely limited. Tickets can be purchased online at AllVols.com [9].