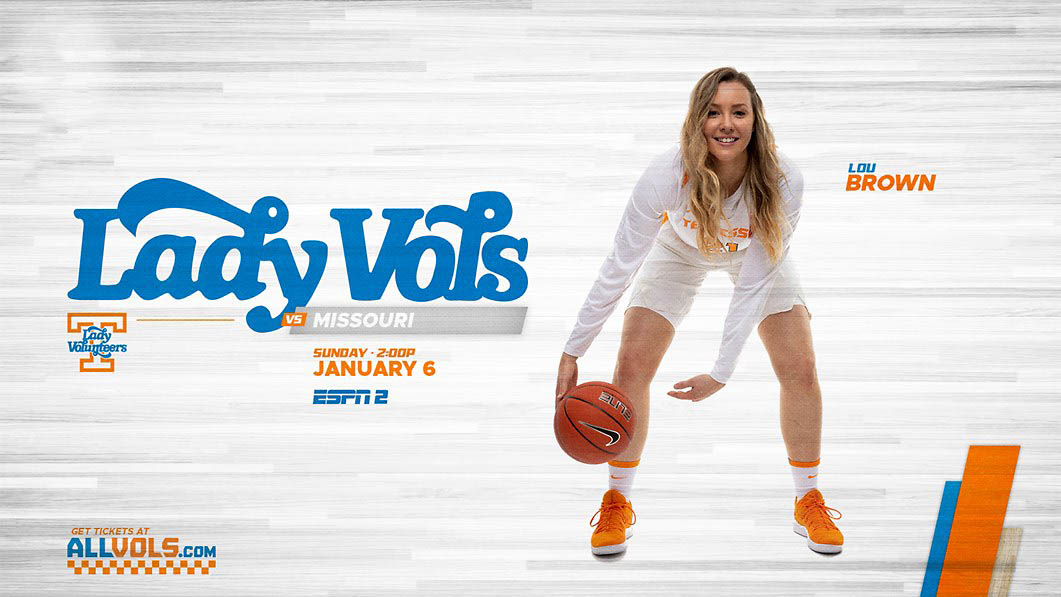 Knoxville, TN –  No. 10/10 Tennessee Lady Vols basketball team (12-1, 1-0 SEC) plays its second straight game against a team with a Tiger mascot, as Missouri (12-3, 1-0 SEC) comes to town for a Sunday matinee. Tip-off is slated for 1:02pm CT at Thompson-Boling Arena, with the game being broadcast by ESPN2 and the Lady Vol Radio Network. 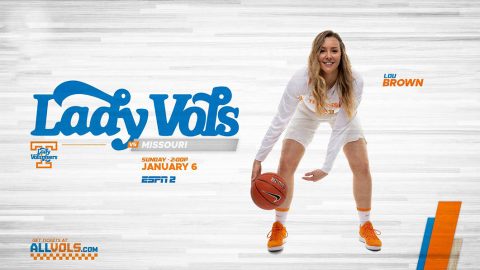 Auburn had one of the four best records produced by SEC teams during the non-conference slate and had been outscoring foes, 82-0 to 62.7.

The Lady Vols improved to 4-0 in road SEC openers under Warlick and to 15-3 in those games all-time. UT has won its last 12 SEC openers on the road.

Beth Mowins (play-by-play) and Debbie Antonelli (analyst) will describe the action for ESPN2.

Sunday is Dads & Daughters Day at The Summitt! The Dads & Daughters ticket package includes a pregame event at the Women’s Basketball Hall of Fame, tickets to the game and t-shirts. For more information visit AllVols.com.

Enjoy the pregame Kids’ Corner at Gate F. It opens one hour prior to tip-off. Fun includes free face painting, the Big Orange prize wheel, visits from Smokey and cheerleaders, crafts and more at the Kids’ Corner.

There will be a halftime performance by Peter Rabbit Bucket Drummer.

Postgame lay-ups: Kids 12 & younger can shoot a lay-up on the court after the game.

Help us Spark the Summitt during Introductions at the game. Download our new free light-up app, courtesy of Coca-Cola. Once downloaded, simply open your Hoops Hype app when the lights go out, and let your phone do the rest.

Against Missouri, the Lady Vols are 4-0 in games played in Knoxville, 1-0 in neutral sites, and 3-2 in Columbia.

Holly Warlick is 5-2 in the series vs. Missouri, possessing a 3-0 record in Knoxville and 2-2 mark in Columbia vs. Robin Pingeton’s squad.

The two times UT has surrendered more than 70 points in the series during the Warlick era, the Lady Vols have dropped both contests. Both were in Columbia, including one last season.

Tennessee has won by an average score of 74.7 to 52.7 in the three games in Knoxville since Missouri joined the SEC.

In games played in Columbia during that time, UT holds only a 65.8 to 65.5 edge in scoring.

In the past seven games combined, the Tennessee Lady Vols have outscored the Tigers by an average score of 69.6 to 60.0.

Warlick also has had a hand in two wins in the series as a player for Tennessee from 1976-80.

M3M3 For Three!
Meme Jackson led UT last season with 50 three-pointers in 33 games. After hitting five of eight at Auburn, she’s on pace to hit 90 or more. If she were to get in that range, that number would place her third all-time at UT for 3FGs in a season.

Consistent Scoring
After putting up 65 points vs. Stetson, the Lady Vols have averaged 85.5 points since then to keep their season number at 82.4 ppg. (45.2 FG%).

Three-Ball Streak
UT has hit seven or more three-pointers in six straight games after having not done that in more than four consecutive contests prior to this year.


About the Missouri Tigers

Among the returnees is senior guard Sophie Cunningham, a three-time All-SEC selection who is averaging 15.7 ppg. and 5.9 rpg.

Missouri is coached by Robin Pingeton, who is in her ninth season at the school and owns a 159-111 record there.

Last season, Missouri went 24-8 overall and finished tied with UT in fourth place in the SEC at 11-5.

The Tigers fell in the first round of the NCAA Tournament to Florida Gulf Coast, 80-70.

In addition to having Sophie Cunningham on the All-SEC Team, Mizzou had Jordan Frericks earning second-team accolades.

UT overcame a 13-point second-quarter deficit and worked the game into a 62-62 tie with 5:18 remaining. However, the Tigers (22-5, 10-4 SEC) used clutch free-throw shooting down the stretch to pull ahead late, including two from Sophie Cunningham with one second remaining that put them ahead by four. Cunningham netted 32 points on 9-of-14 shooting to lead Missouri.

Diamond DeShields fired in 22 points, as the Tennessee Lady Vols pulled away from the Tigers in the fourth quarter to win, 77-66, in Knoxville on January 9th, 2017.