The 2019 campaign gets underway March 8th-10th when the Governors travel to Gulf Shores, Alabama for The March to May tournament, held at the site of the 2019 NCAA Championship. They will face Texas A&M-Corpus Christi, New Orleans, Spring Hill and Southern Miss. 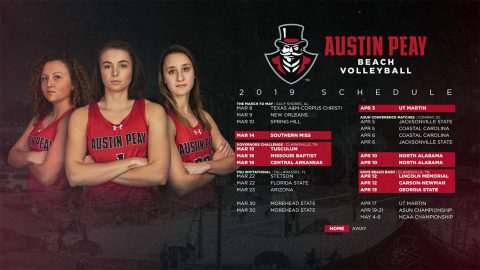 The home slate for the Govs begins with a rematch against Southern Miss, March 14th, followed by their first tournament of the season – the Governors Challenge – March 15th-16th, where they will host Tusculum, Missouri Baptist and Central Arkansas.

The Govs then travel to the Florida State Invitational, March 21st-22nd, in Tallahassee, Florida, hosted by the 2018 national runner-up Seminoles. APSU will face off against Stetson, FSU and Arizona.

In their inaugural season in the ASUN Conference, the Govs get conference play underway with a doubleheader at Morehead State, March 30th. The Govs have a brief reprieve at home with a doubleheader against UT Martin, April 3rd, before hitting the road for four conference matches in Conway, South Carolina against Jacksonville State and Coastal Carolina, April 5th, and again, April 6th.

The Govs will host their lone ASUN home doubleheader, April 10th, against North Alabama before hosting the Govs Beach Bash, April 12th-13th, where they will face Lincoln Memorial, Carson-Newman and Georgia State. They wrap up the regular season slate with a midweek doubleheader at UT Martin, April 17th.

The ASUN Championship will be held April 19th-21st at the Cooper Beach Volleyball Courts in DeLand, Florida. The conference championship, hosted at Stetson, is a double-elimination bracket with a single-elimination championship match. The top finisher from each division gets an automatic entry, and the final four spots will be at-large selections.