Knoxville, TN – No. 13/13 Tennessee Lady Vols Basketball (12-3, 1-2 SEC) faces back-to-back road games in a five-day span, beginning with a Sunday matinee at Georgia (11-5, 2-1 SEC) on Jan. 13th. Tip-off is slated for 2:02pmCT at Stegeman Coliseum in Athens, with the game being carried by ESPN, the Lady Vol Radio Network and SiriusXM.

This marks the 68th meeting between these programs in a series that ranks behind only UT-Vanderbilt (80 games) for most times played by Big Orange women’s hoops. The Lady Vols will try to respond in positive fashion from back-to-back home losses to Missouri (66-64) and #16/16 Kentucky (73-71). 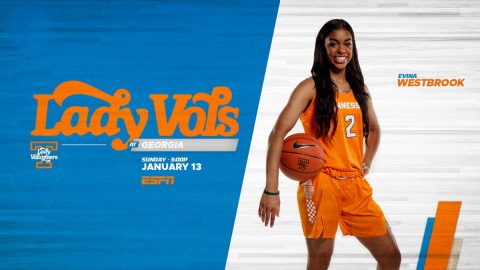 Counting a 2-0 mark in winning the Junkanoo Division title at the Junkanoo Jam in the Bahamas, the Lady Vols are 5-0 away from Thompson-Boling Arena this season.

UT and Georgia both have played Presbyterian, with the Lady Vols opening the season on Nov. 11th with a 97-49 win in Knoxville. The Lady Bulldogs claimed victory over the Blue Hose in Athens on December 28th, 83-59.

Pam Ward (play-by-play) and Carolyn Peck (analyst) will describe the action for ESPN.

Tennessee is 1-3 vs. UGA in overtime games.

The Lady Vols have a 14-3 postseason record against Georgia after winning in the 2015 SEC quarterfinals.

These programs have met 53 times when both teams were ranked and twice with neither team ranked. This is the 12th occasion when only one was ranked.

Tennessee and Georgia rank No. 1 and No. 2 in SEC regular season championships, with the Lady Vols owning 18 and the Lady Bulldogs having seven.

Tennessee and Georgia met in the 1996 NCAA Championship game in Charlotte, with the Lady Vols prevailing, 83-64, in the first of three straight national championship seasons.

London Calling
Senior Cheridene Green has found her groove,  averaging 11.0 rpg. and nine ppg. while hitting 48% on FGs in three SEC games. She has posted career high carom totals of 14 vs. Mizzou and 15 vs. Kentucky the past two games..

Get Yourself 20, E!
Sophomore point guard Evina Westbrook led UT with 20 points vs. Kentucky. It marked her seventh 20+ point performance of the season and the ninth time in the past 10 games a Lady Vol has scored 20+.

Pounding The Glass
UT has won the rebounding battle in 13 of 15 games this season. UT pulled down 50 rebounds vs. UK on Thursday night, marking its fifth 50+ carom game of the season. The Lady Vols tied their season high with 28 offensive rebounds.

The No. 13-ranked Tennessee Lady Vols fell, 73-71, to the 16th-ranked Kentucky Wildcats on Thursday night at Thompson-Boling Arena.

The Lady Vols (12-3, 1-2 SEC) overcame a 17-point first-quarter deficit and a 16-point third-quarter deficit to pull within two points after a pair of free throws from Meme Jackson with one minute remaining.  A three-pointer from Wildcats guard Jaida Roper, however, put the game out of reach for the Big Orange.

Sophomore point guard Evina Westbrook led the charge offensively for the Lady Vols with 20 points, marking her seventh performance of the season of 20 or more points, and added six rebounds. Sophomore Rennia Davis (12 points) and freshman Mimi Collins (career-high-tying 11 points) were the other Tennessee players with double-digit scoring. Senior Cheridene Green dominated the glass with a career-high 15 rebounds, including eight offensively.

Kentucky (15-2, 2-1 SEC) was propelled by a 27-point night from senior guard Maci Morris, who connected at a 4-of-6 clip from deep range and shot over 60 percent from the field.

Sophomore Gabby Connally is averaging 13.3 ppg on the season and is the team’s leading scorer in SEC play at 18.3 ppg, shooting 47 percent from the floor and 56 percent from 3-point range.

Redshirt junior Taja Cole is averaging 11.1 ppg and ranks first in the SEC and seventh nationally with 6.7 assists per game.

In the SEC Tournament the Lady Bulldogs defeated Missouri, 55-41, in the quarterfinals before falling in the semifinals to eventual champion South Carolina, 71-49.

Georgia lost in the NCAA Second Round to Duke.

Down by nine at the half, Georgia came out and hit timely shots to grab a 66-63 lead with just over six minutes remaining.

Caliya Robinson led the Lady Bulldogs with a game-high 26 points.

MSU’s Chloe Bibby had a career-best 24 points to lead Mississippi State, while All-America center Teaira McCowan had 18 points and 21 rebounds.

Taja Cole and Mackenzie Engram scored 12 each to lead the Lady Bulldogs.


Last Time They Played in Athens

Despite a season-high 34 points from Diamond DeShields, #RV/25 Tennessee fell short in double overtime against Georgia, 81-78, at Stegeman Coliseum.

UT plays its second road game in five days on Thursday, January 17th, as the Lady Vols face Alabama at Coleman Coliseum. Tipoff is at 8:00pm CT/9:00pm ET with the SEC Network televising.