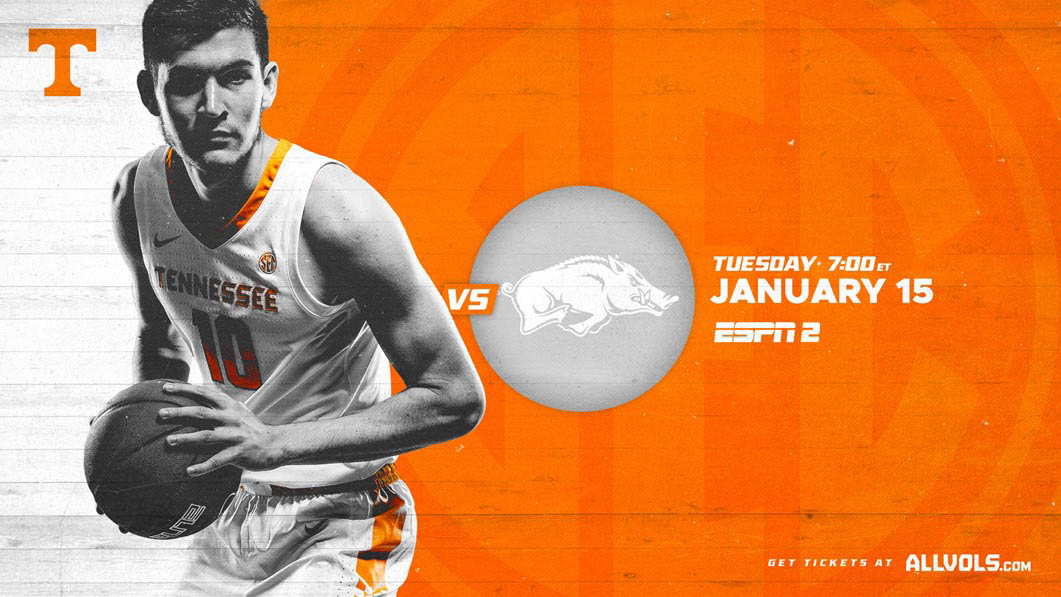 There are still tickets available for the game. You can visit AllVols.com to purchase tickets for Tuesday’s game or any of the other weekday games for the rest of the season. 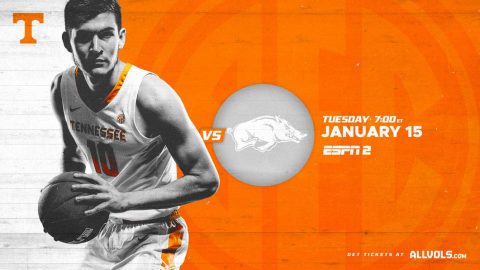 “Without question, this is the best fanbase I have ever been around,” said head coach Rick Barnes. “You talk about 21,000 fans for Tennessee Tech and almost 20,000 for Wake Forest both around the holidays. We already have some games sold out. I can tell you this is the best fanbase I have been around. I can tell you we appreciate it as a program. I know our players love it too.”

Jordan Bowden had an impressive week and was crucial to both of the victories, averaging 18.5 points per game while shooting 52 percent from the field. Against the Gators, he scored 14 of his 17 points in the second half, including a stretch of 12 consecutive points to snap a 4:17 scoreless drought for the Vols.

The scoring spree was capped off by a 3-pointer followed by a steal at midcourt for a one-handed slam at the other end to give UT a 65-63 lead that Tennessee wouldn’t relinquish for the rest of the game. It was the Big Orange’s first win in Gainesville since 2012.

Arkansas (10-5, 1-2 SEC) is one of the youngest teams in the country with no seniors and only one uppperclassmen on scholarship. Anchoring the group is All-SEC forward and projected first-round draft pick Daniel Gafford, leading the team in scoring (17.5 ppg), rebounding (9.5 rpg) and blocks (2.2 bpg). He ranks 11th in the country in field-goal percentage, shooting an impressive .658 clip. The 6-11 sophomore is a monster in the paint with seven double-doubles to pace the SEC and will be a good matchup for Grant Williams.

After Tuesday’s showdown, the Vols host Alabama in Thompson-Boling Arena on Saturday at 2 p.m. ET in front of a sold-out crowd. The game will be broadcasted on ESPN2 and can be streamed online at WatchESPN.

Give Tennessee a winning record in its all-time series with the Razorbacks.

The Volunteers are receiving 13 first-place votes in this week’s AP Top 25 poll.

This is Rick Barnes‘ longest win streak since he led Texas to 11 straight victories from January 11th-February 16th, 2011.

The Vols have shot 50 percent or better in 12 games this season (and nine of their last 10).

With an average attendance of 17,499, Tennessee ranks fourth nationally.

Admiral Schofield is the SEC’s second-leading scorer (17.7 ppg), and is shooting .446 from 3-point range.

Kyle Alexander is the SEC’s top rebounder during conference play, as he averages 12.0 rebounds per game.

Jordan Bowden leads the Vols and ranks third in the SEC with 19.0 points per game during league play. And he’s doing it off the bench.

About the Arkansas Razorbacks

The Arkansas Razorbacks (10-5, 1-2 SEC) lost a lot of talent from last year’s squad, as the team’s top two scorers both graduated. Now, Mike Anderson is trying to rebuild the program with 13 underclassmen and no seniors on the roster.

Anchoring the group is All-SEC forward and projected first-round draft pick Daniel Gafford, leading the team in scoring (17.5 ppg), rebounding (9.5 rpg) and blocks (2.2 bpg). He ranks 11th in the country in field-goal percentage, shooting an impressive .658 clip. The 6-11 sophomore is a monster in the paint with seven double-doubles to pace the SEC.

Mason Jones is another player to keep an eye on. The sophomore guard ranks second on the team in scoring (14.8 ppg), rebounding (4.9 rpg) and assists (3.1 apg).

Freshman guard Isaiah Joe (14.1 ppg, 1.5 spg) rounds out the double-digits scorers for the Razorbacks. Joe is the team’s best 3-point shooter, ranking second in the SEC with a .432 3-point field-goal percentage. On the season, he’s knocked down 51 shots from beyond the arc.

Jalen Harris (8.8 ppg, 6.5 apg) is the reason the Razorbacks rank second in the SEC in assist/turnover ratio (1.32). The redshirt sophomore is fifth in the nation in that category with a 4.45 ratio.

Hot shooting propelled No. 2 seed Tennessee to an impressive 84-66 wire-to-wire victory over the sixth-seeded Arkansas in the semifinals of the SEC Tournament on March 10, 2018, at Scottrade Center.

The Vols advanced to their first SEC Tournament Championship Game since 2009 and will face the fourth-seeded Kentucky Wildcats on March 11th.

Jordan Bone fueled the Big Orange offense Saturday with 19 points and four assists on the day. He was one of five different Volunteers to score in double figures. Admiral Schofield posted another strong performance with 16 points, seven boards and two assists.

The Vols put on a show offensively, shooting 57.1 percent (28-of-49) from the field. That percentage just narrowly missed Tennessee’s season-high of 57.5 percent at South Carolina on January 20th, 2018. UT did surpass its season-high for 3-point shooting, making 64.7 percent (11-of-17) from deep.

Despite Arkansas facing a 19-point deficit at the break, the Hogs (23-11) didn’t go away quietly. An 8-0 run pulled the Razorbacks within 11 points with 15:24 remaining in the game. To begin the second half, UT was 1-of-8 from the floor.

Tennessee would not relinquish its lead, though, converting on 14 of its 16 trips to the free-throw line during the frame to halt any possible comeback by the Razorbacks.

When Tennessee tips off vs. Arkansas Tuesday, 52 days will have elapsed since the Vols last lost a game (that lone loss came on November 23rd against Kansas).

The federal government was operational the last time Tennessee lost.

K-State and UCLA both were ranked in the top 20.

Tennessee’s Field-Gold Percentage Through The Roof

This season, the Vols have shot better than 50 percent in 12 games—including nine of the last 10.